Top of the Rock came out on top of another matchup. This two-game winning streak is a franchise record!

It is incredible to see how far we’ve come as a team, just two weeks into our second season.

For the second straight week, we scored a six category win. At least this time around, we only gave up two spots in the overall matchup.

The matchup had two ties, goals and wins, which could have really altered the final score. A 6-2 victory looks like a blowout. It could have easily been 6-4 or a massacre at 8-2.

Except for SOG and SV%, this was really anyone’s matchup. Every other category was won by a mere three points or less.

As you can see, Top of the Rock trailed the entire matchup. We kept it close for five of the six days leading up to Sunday, but it looked like a disaster in the making on Wednesday. 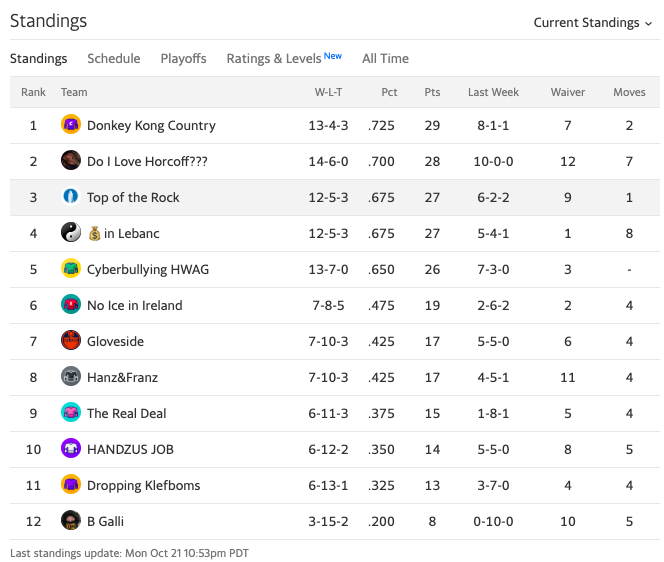 If you looked back at the standings from last season, you would have seen that after just two weeks, we were the worse team.

Times have changed, and we sit in the upper part of the standings. Currently, we are tied with Money in the LeBanc, while Do I Love Horcoff??? Pulled off a perfect 10-0-0 sweep in week two.

Through the first three weeks of the season, we have made the least amount of moves with one. Teams are tinkering with their lineups, but sometimes those alterations don’t equal wins.

There are 12 teams in the league, which means if you are in the top six of any category, you look like a genius. Anything under the 10th spot and you should reevaluate your strategy. Assists and Power Play Points seem to be our most significant holes. We rank pretty high in all the major player categories while running the table in the goalie department.

It is still early in the season, so win/loss records don’t look so bad now. It is during the following weeks that you start to notice where your strengths and weaknesses are.

The management of the bench players cost us and saved us a few points here and there in week two. We tied the goals category, 7-7, but left three goals on the bench. Thankfully we left our -9 rating out of the lineup since we only won the group by two points.

In preparation for our week three matchup, we dropped New Jersey winger Wayne Simmonds. The Devils only play one game that week, so we made room for Toronto forward Alexander Kerfoot. The Maple Leafs play four games during the matchup.