Canyon of Heroes returned to the win column thanks to a convincing 11-0 shut out victory over MP.

It was our first shutout win of the season and helped snap a losing streak that seemed to linger on forever.

For the first time in forever, we won a matchup where the numbers weren’t even close. We had a very subpar week in between the pipes and still won each category with ease.

We are not quite sure what happened to MP’s team during the week, but they only mustered up 10 totals points, a far cry of 14 less than us.

It was a weird week since we also finished as a plus team for the first time this season. We also managed 100 shots on goal and five power points, which has been our weakest category.

Thanks to a 6-2 and 9-2 lead on the first days, the matchup turned in our favour on Wednesday. We never looked back after that day, only dropping a category and regaining it by the end on Sunday. 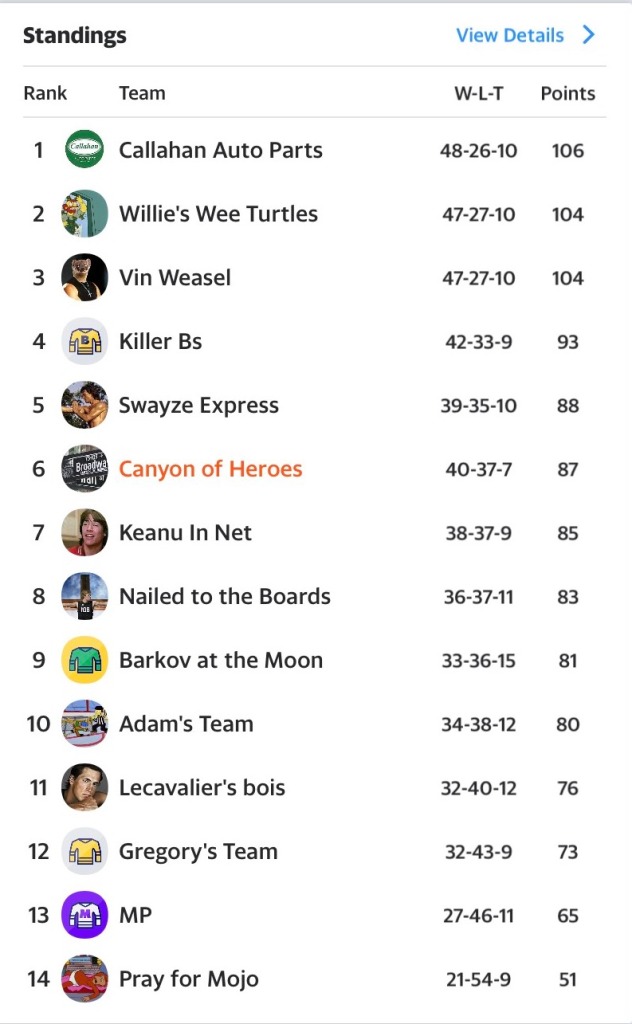 Thanks to an 11-0-1 victory, we capitulated four spots up to sixth overall. That is the last seed in the playoff format, so it is comforting to be so high. We do remain 19 points out of first place, but our focus is just staying within the top six.

The win also padded our 36 point lead out of the last place. We cling to a two-point advantage over the seventh place, so anything can happen between now and then.

Our apologies for not compiling team statistics during Week 7.

The four points we left on the bench would have only added insult to injury in the matchup. Since we didn’t record a shutout, our goalie totals would have only aided our overall season numbers, which already rank near the top anyways.

For once, our bench had absolutely no impact on the outcome of the matchup.

We made no roster transactions during week six.