After Top of the Rock ended a seven-game losing streak in the previous week, the pressure must have gotten to the guys during their Week 13 matchup.

No Ice in Ireland got their revenge from a week two defeat and beat us handily 6-1-3.

The loss, our eighth in the last nine, has dropped us to a place we all too familiar with last.

It is truly a miracle that we escaped this massacre with one win and three ties. We had no business securing points in those four categories, but thankfully some things fell in our favour, and it wasn’t a complete shutout.

We lost two categories by five (assists and +/-) and got doubled up in penalty minutes and power-play points. Our only win came thanks to eight more shots on goals.

Ireland had the better goals-against average and save percentage, but we tied them in wins and shutouts.

For the umpteenth time this season, we stormed out of the gate with a commanding 6-0 lead. After that, we played tied hockey for three days before we regained the lead on Friday. Like always, the tide turned on us by Saturday, and the matchup slowly drifted away by the final puck drop on Sunday.

Well, like they always say, when you are down this far, there is only one place to go…up! 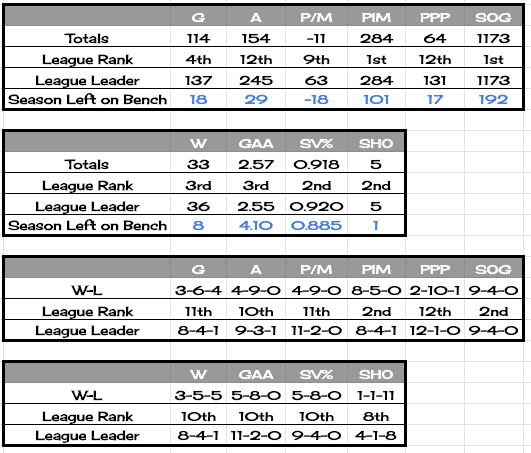 Thanks to some snipers on the team, we jumped up a spot in the goals category. We stayed in the usual places in assists, penalty minutes, power-play points, and shots on goals. Our plus-minus spot fluctuates based on how good or bad we do during the current week.

Our goalies came through for us in a time of need. After posting the worse numbers of the season in the previous week, the guys rebounded, and it showed in the overall stats. Although we have some ground to make up to get back to first overall, holding down the second and third spots is pretty good, given our talent.

Thankfully neither Henrik Lundqvist and Alex Georgiev started for us this week because their numbers were cringed worthy. Neither Blueshirt collected a win, and both played terrible in Edmonton. They got a little bit better during the west coast trip, but it would have been hard on our final numbers had the two started.

Top of the Rock made no roster moves during the matchup.