After a beating at the hand of the first-place team in week 12, our losing streak reached three straight in a close 6-5-1 loss to Swayze Express.

The loss dropped us another spot in the standings, as the playoff slowly drift away.

Heroes may have lost the matchup 6-5-1, but the numbers could have gone either way.

We collected four more goals but needed three more assists to get that category. That one point difference gave us the points category. We tied the plus/minus department (-6) before we lost power-play points and game-winning goals by one.

Express had three more shots on goals while we finished with five more hits. Our goalies notched one more win but lost the goals against category by 0.58 points, and the save percentage by 0.16 points. Our platoon of goalies collected one shutout to their zero.

The Christmas break went into effect on Tuesday, which gave us time to regroup from a 10-1 deficit on day one. When the players return from break, we tried to make it a series, only to come up short on Sunday. 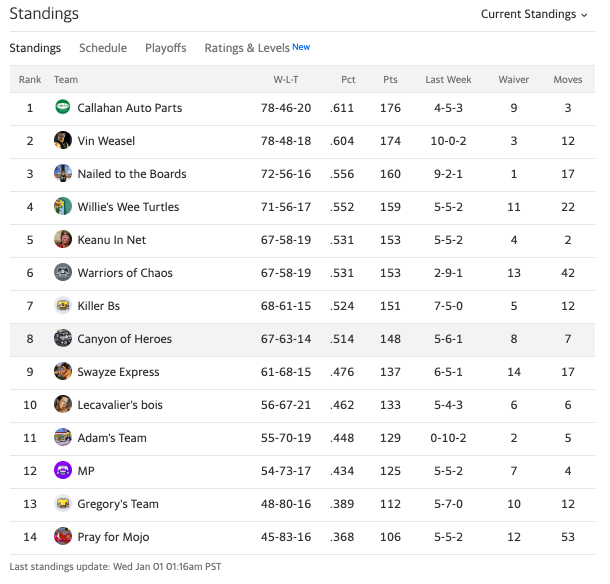 Even though we sit five points behind a playoff spot, a three-game losing streak keeps us on the outside looking in. If we continue to lose, there’s no telling who will catch up to us. 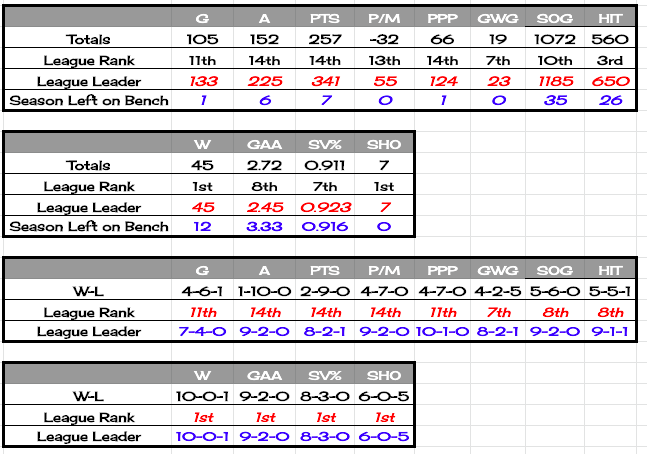 We continue to take one step forward and one back at the same time. We dropped down in goals for, which left us clinging to only two placements within the Top 10 of any offensive categories.

Sadly, we remain the league’s worse team in regards to assists, points, and power-play points. We are on the edge of oblivion in plus/minus.

Our goalies did not move up or down in any of their four categories.

In week 12, our roster management saved us a point. If you notice Anaheim captain Ryan Getzlaf played one game and had a -2 rating. Had those numbers been added to the matchup, it would have cost us the one category we secured a tie in. That would have given Swayze Express a more decisive 7-5 win.

Hot off a wild goal-scoring streak, we added Flordia Panthers forward Noel Acciari. We were very familiar with his skill set from the years he played in Boston. Here’s hoping he contributes to a lineup with the league’s worse point totals.