Pinstripe Bowl pulled off the impossible in week 16, winning their first league championship after trailing an insurmountable 30.08 points (114.16-84.08) headed into Monday Night Football. KerryMy Johnson was the number one team for most of the season and had one player (Buffalo Bills kicker Tyler Bass) left to play to seal their victory. No one except for Bills fans would have expected Bass’ teammate Stefon Diggs to have a monster game, but one of the best receivers in the game racked up 145 yards on nine catches and three touchdowns.

Diggs’ performance single-handily erased the 30.08 deficit for Pinstripe Bowl and handed them the championship by a slim 3.42 margin, thanks to a season-high 41.50 points.

The 2020 Championship game will be remembered for years, not because we won our first ever fantasy championship, but because it will go down as one of the tightly contested battles of all-time.

For the first time this season, there were no football games on Thursday night. Instead, the action moved to Friday, Christmas Day. However, neither the Bowl nor Johnson had anyone in the Minnesota Vikings and New Orleans Saints game. Our matchup took off on Saturday, where we jumped out to an early 29.28-17.80 lead.

The initial projections featured Johnson walking away with the championship, thanks to a 141.13-132.92 win (8.21 pt margin). After collecting just a handful of points in those three games, real-time projections took a dip, and the matchup was even going to be closer than first thought.

Saturday afternoon and evening could have played out so differently. Pinstripe Bowl management spent hours researching who to start and who to sit. Many nights were spent wondering what to do, whether to start franchise icon and greatest quarterback of all-time Tom Brady (Tampa Bay) against a coachless Detriot Lions or start sophomore sensation Kyler Murray (Arizona) of the top scorers all season.

In the end, Murray won out because not only can he throw, he can run, which meant he had a higher upside. The championship hung in the balance based on that one move since Murray got injured and only scored 16.38 points, although projected 26.56. Meanwhile, Brady did what he has done his entire career and carry his team to a lopsided win. He scored 33.92 points in the first half, including four touchdowns, and never took a snap in the second half. The 17.54 point swing would have provided more than enough of a lead that it wouldn’t have come down to the final play on Monday night.

Another potential heartbreaking roster selection involved two Las Vegas Raiders players, running back Josh Jacobs and wide receiver Nelson Agholor. Jacobs has been a lock in the starting lineup all season and was projected for his usual 15.98 points, only to collect 6.90. The Raiders coaching staff refused to let him score in the dying seconds, opting for a field goal that would eventually cost them the game. It was so frustrating from a fantasy owner’s perspective, but what can you do. Agholor, a free agent, picked up just two weeks ago on the waiver wire, turned in a 26.50 point performance. His numbers were unexpected since he was projected for 12.88, yet it was painful to see 60.42 points sit on the bench. Just in case you forgot, we had only collected 29.28 points from our starters.

Sunday didn’t go in our favour has Johnson outscored us 96.36-54.80, erasing our lead and jumping ahead by 30.08 points. This reversal of fortunes set the stage for Diggs to save the day.

I will not lie to anyone who reads this. After Saturday’s game, I didn’t watch a single second of football on Sunday or Monday. KerryMy Johnson was projected to win, and after a few bone head moves on Boxing Day, I just didn’t have it in me to watch a second opportunity to win a championship wither away. 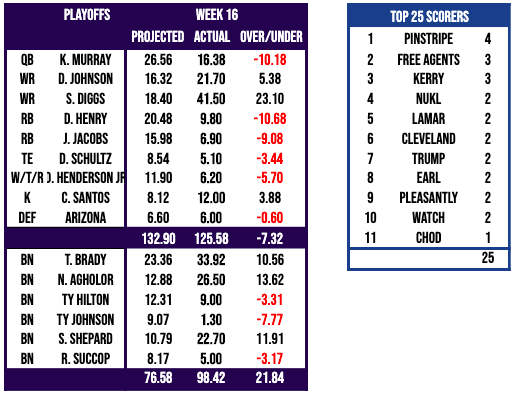 Pinstripe Bowl’s numbers suffered greatly on the grandest stage of them all. Superstar running back Derrick Henry (Tennessee) had his fourth lowest-scoring game of the season (9.80 points) against one of the league’s worse run defences, Green Bay.

Newly acquired tight end Dalton Schultz (Dallas) joined the team after Hunter Henry (Los Angeles) went down with COVID. He also underperformed by three points, contributing just 5.10. He was joined by another new player, Darrell Henderson Jr (Los Angeles). The tailback managed only 6.20 points (11.90 projected), filling in for Ronald Jones II (Tampa Bay), another COVID list victim. The Arizona Cardinals defence had a decent matchup against San Francisco, but they also failed to secure a win and meet their projections. 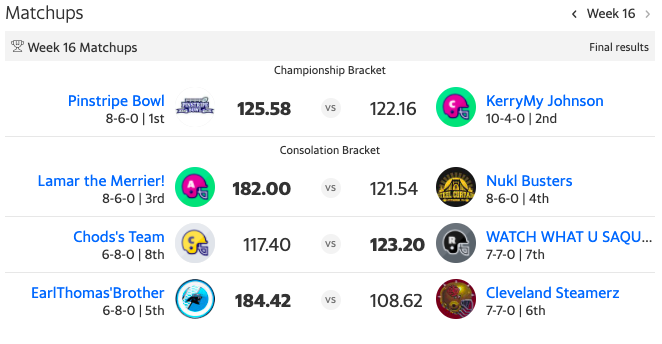 The championship game wasn’t supposed to be so low scoring. Pinstripe Bowl secured the win despite scoring the third-highest score out of four matchups. EarlThomas’Brother compiled the third-highest weekly total on the season, while Lamar scored the fourth highest. In the final weekend of the season, no team failed to reach 100 points.

EarlThomas’ 75.80 point victory was the league’s 7th largest margin in a matchup, while Pinstripe’s 3.42 win was the 5th closest contest of the season.

It is still hard to fathom that Alvin Kamara scored six touchdowns in his Christmas Day game against Minnesota. His 56.20 points still came in second to Tyreek Hill’s performance in week 12, where he scored 57.90 points.

Diggs, meanwhile, went on to score a team-high 41.50 points on Monday night. His totals eclipsed Murray’s total of 41.10 in week seven.

Brady scored 33.92 points on the bench, which ended up being the second-highest total on the team. Even though Schultz scored 5.10 to earn worse starter honours, his performance wasn’t even the worse. That belonged to Ty Johnson of the New York Jets with 1.30 points.

As mentioned before, Jones II wound up on the COVID list for the second straight week. We wanted another running back in the lineup and choose Henderson Jr since Cam Ackers was headed to injured reserve.

Ryan Succop (Tampa Bay) has been our main kicker all season but didn’t have a great matchup against Detriot, so we secured Santos’ service in place of Matt Gay.

When news broke that Hunter Henry also tested positive with COVID, we needed another tight end, and out of the slim pickings, snagged Schultz off the free-agent market.

Since this was the final game of the season, we decided to cut a handful of players, including the Seattle Seahawks defence, since we would no longer need their services.

Thank you to all the friends and family who have supported us on our journey to the top of the mountain. See you next season when we return to defend our championship!