Top of the Rock were members of The Price is Right for three seasons. In the first two seasons, the team finished in last place before finishing their tenure in the league as silver medalists. They say third times a charm, and after being the league’s punching bags for way too long, the team hit the ice during the shortened 2021 season, finishing as the second-best team in the division. They carried the momentum from the regular season into the playoffs, where they earned a chance at the championship before bowing out in the finale.

Management decided that it was time to relocate the franchise despite a successful season and found a new league, The Frozen Factory. The most appealing aspect of this league is the daily lineup adjustments. In The Price is Right league, management could only alter their lineup on Monday afternoon and did not have the option to change players during the matchup.

The previous league had one division and ten teams, while the Frozen Factory is just six teams with two divisions. This new format should make for some exciting matchups as the season progresses.

In 2017, management joined their first fantasy hockey league. That was the year the “Swedish” theme was born. The team lost in the semi-finals that season because the goalies didn’t play enough games, even though the matchup score was 8-4 in their favor. That team’s makeup almost advanced to the finals in their first season, so management returned with the same idea in 2018.

The theme was a failure in the first season as Price is Right members, so management adjusted and abandoned their plans in 2019. Things didn’t work out with a new roster makeup, so they reverted to the same strategy in 2021. Since the method has proven successful (minus a championship) on two separate occasions, it will be business as usual in The Frozen Factory.

This league’s roster had 23 spots with three IR (injure reserved) spots, two IR+ spots, and one NA (not available) spot. On the offensive side, there were nine spots with three centers, three left-wingers, and three right-wingers. On the back end, there are four defenseman spots and two goalie ones. There are an additional two utility player spots and four bench spaces.

Unlike standard fantasy leagues, the Frozen Factory relies heavily on goalie points with wins valued at five points, losses at minus three, goals-against count for one point, while saves are worth half a point. Shutouts are the most valuable statistic in the league, worth seven points.

On the player side of the score sheet, shorthanded points are the most valuable statistic, worth three points. Next are goals, plus/minus, and powerplay points which are worth two points apiece. Assists, hits, and blocks all equal one point, while shots on goals are the least valuable at half a point.

The first six selections in the 2021 draft featured the best of the best in the NHL. Connor McDavid and his best friend Leon Draisaitl, both members of the Edmonton Oilers, went first and second. That left Victor Hedman (Tampa Bay) available, and he became Top of the Rock’s first selection. Hedman’s battery mate on the back end, Andrei Vasilevsky, followed fourth overall, becoming the first goalie taken in the draft. Nathan McKinnon (Colorado) went next in the fifth spot before Brady Tkachuk (Ottawa) finished the opening round.

The Rock’s following selection (10th overall) was Robin Lehner from the Vegas Golden Knights. He joined Connor Hellebuyck as tenders selected in the second round. In the third round, Mika Zibanejad (NY Rangers) joined the team as the 15th pick in the draft. A couple of goalies kicked off the fourth round, where Top of the Rock selected Colorado Avalanche captain Gabriel Landeskog, who just signed a new long-term extension with his NHL club.

In a stretch pick early in the draft, management decided on Elias Pettersson with the 27th overall pick. The Vancouver Canucks center is coming off a season plagued with injuries and selected two spots after future Hall of Famers Sidney Crosby, who started the fifth round. As the snake draft progressed into the sixth round, The Rock chose Linus Ullmark from the Boston Bruins to form their goalie platoon with Lehner. Management drafted Nicklas Backstrom (Washington) in the seventh round, slated to start on long-term injured reserve after off-season surgery.

When it was time for the team to select again, Elias Lindholm (Calgary) became the newest member of Top of the Rock with the 46th selection in the draft. Patrick Hornqvist (Florida) joined his countrymen with his pick in the ninth round. Last season, both players were fantasy teammates and welcomed another returning player, Filip Forsberg (Nashville), in the tenth round.

Since The Frozen Factory relies heavily on goaltender statistics, The Rock drafted their third goalie, Jacob Markstrom (Calgary), with their 11th pick of the draft. Paired with Lehner and Ullmark, the three will split time depending on who is scheduled to play or not. The Frozen Factory’s eleventh round featured three goalies and three defensemen, the only round of its kind in this year’s draft.

In the twelfth round, management took a flyer on Adam Larsson, one of the marquee signings for the Seattle Kraken this offseason. As a former first-round pick traded for a league MVP, Larsson has a chance to prove he is still an elite defenseman on the expansion Kraken team.

Joel Eriksson Ek (Minnesota) recently signed a new deal with the Wild to serve as a top-line player. He does tend to have hot and cold streaks, so it will be interesting to see how his season plays out, especially since he doesn’t have to worry about inking a new contract.

All-star defenseman John Klingberg (Dallas) joined The Rock in the 14th round. Klingberg is in the last season of his deal and should put up some remarkable offensive numbers to increase his value on the open market next summer. Complimenting the defensive corps is Oliver Ekman-Larsson (Vancouver). The former captain of the Arizona Coyotes was moved to the pacific northwest in a blockbuster deal this past summer.

William Nylander (Toronto) was another marquee draft pick, rejoining the Top of the Rock as a late 16th pick, 94th overall. William Karlsson (Las Vegas) returned to the team for the fourth consecutive season with his pick 17th round.

As the draft slowed down, management took a massive gamble in the 18th round by selecting Alexander Edler of the Los Angeles Kings. The offensive defenceman departed from the Canucks this off-season and hopes a change of scenery sparks his play.

In the 19th round, management selected their third member of the Calgary Flames, claiming Mikael Backlund, who can play center and right-wing. Rickard Rakell (Anaheim) joined the team in the 20th round with only one selection left. Then with the final pick in the 21st round, Adrian Kempe (Los Angeles) completed the Rock’s opening night lineup.

According to statistics on NHL.com, 88 Swedish-born players suited up for at least one game during the shortened 2021 season. Except for some goalies, Top of the Rock stayed true to their game plan, and it almost resulted in a championship victory.

As of this writing, there have been 67 Swedish players in the NHL during the 2021-22 campaign. The Rock currently employs 23 players, which accounts for roughly 34% of the country’s players. How will these players stack up against the other teams in the league in this type of format? The chart below showcases how successful our team could be based on early projections. 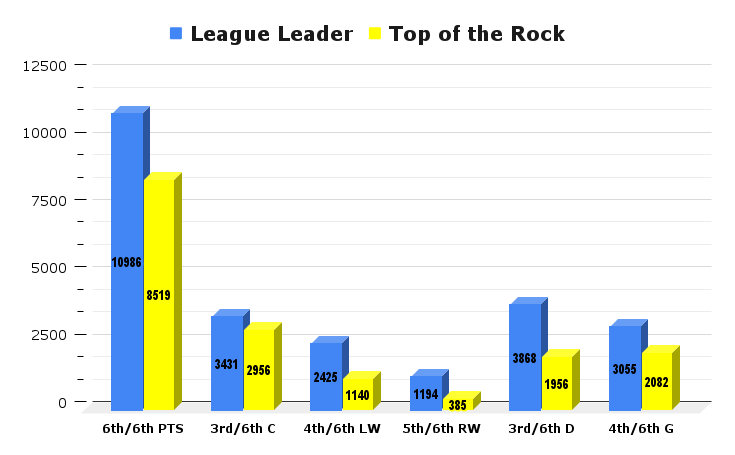 The experts at Yahoo Fantasy pegged Top of the Rock to be the worst team in the league, finishing in sixth place overall, four spots behind an auto-drafted team that still doesn’t have a real-life manager. This team will boast the league’s third-best centers and defenders, with the fourth-best collection of left-wingers and goalies. When crunching the rest of the numbers, The Rock should have the fifth worse right-wingers.

In conclusion, management built a contender with Sweden’s best players. This format may have worked in other leagues with other structures; however, it is tough to see a chance for success in a league that relies on a whole new scoring system.