There will be a new champion in Ladies and Edelman since a loss to Trump Towers in week 15 cost Pinstripe Bowl a chance of making the league playoffs. It seemed only fitting that a team run by an American-born manager would lose to a team named after one of the country’s most controversial Presidents.

This defeat was the second time in two weeks that the Bowl lost to an opponent with a margin of fewer than five points. Just when the team rallied and fired off a four-game winning streak to salvage their season, back-to-back close calls forced the team down the standings and into the consolidation bracket of the league playoffs. 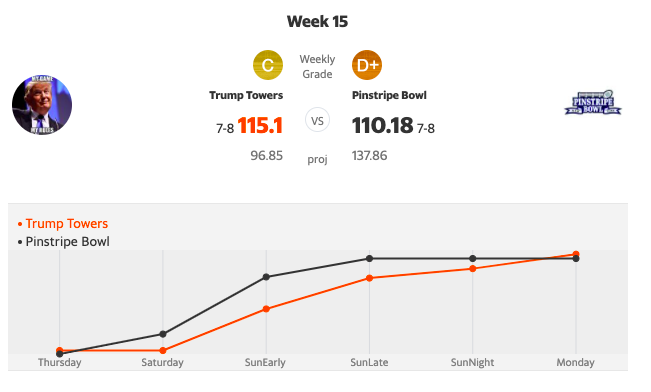 Pinstripe Bowl was a heavy favorite when the initial projections were released. The defending champions had a chance to finish the season with a winning record thanks to an opportunity to secure a 41.01 point victory in week 15. Sadly Trump Towers came to play and exceeded their projections by 21 points to earn a nail-biting 115.10-110.18 point victory.

The matchup was in the Bowl’s favor despite falling behind by four points after Thursday night. They rebounded for 23 points to grab a 23.00-8.00 lead heading into Sunday’s action on Saturday. As the day progressed, they kept scoring points, earning a 110.18-98.50 point lead with only Monday left on the schedule. Trump Towers had a player left who exceeded his projections, scoring 16.60 points handing his team the huge come from behind victory.

Jonathan Taylor (Indianapolis) ran away with 23 points in the defeat. He was the only player in the starting lineup to score more than 20 points and one of six players to reach double digits. Despite scoring the team’s most points, he barely eclipsed his projections by just 1.94 points.

Six of the nine starters failed to reach their potential in week 15, which was a significant reason why the Bowl couldn’t seal the deal and secure the win.

The bench players had more 20 point collectors (two) than the entire starting lineup. The non-starters scored 79.76 points, which was 30.42 points behind the starters. Hunter Henry and Mac Jones (New England) had great weeks on the bench, outscoring everyone in the starting lineup. Had Hunter and Jones played, Jones would have outperformed Kyler Murray (Arizona) while Hunter collected more points than George Kittle (San Francisco) and Zach Ertz (Arizona).

The Bowl finished the regular season with two players in the top 25 in league scoring, Murray and Taylor.

The final week of the regular season seemed to be a mess for all the teams in the league. What’s an ACL anyways finished the campaign by scoring the league’s fewest points in their 13th loss, 46.30 points. Garoppolypse Now and Chod’s Team joined the league’s worst team as the three failed to reach the triple-digit club.

The Bowl’s 110.18 points were the most by any team who didn’t win, beating out KerryMy Johnson’s 103.92 points. The league’s best team was Pleasantly Plump, who scored 144.10 points in their win over ACL.

Despite the win, Trump Towers joins ACL as the only non-playoff team in the league. The Bowl will open the consolidation tournament against arch-rivals KerryMy Johnson while Plump will take on Cleveland Steamerz.

Taylor earned his fifth-best player award, tying Murray as the only player who claimed five trophies during the regular season. His 23.00 points were the second-lowest total of his five wins and third-lowest of any winners. He won all five of his awards in the final ten weeks.

Chase Claypool (Pittsburgh) claimed his first worse starter award with just 1.90 points during his contest. The Steelers wide receiver became just the fifth player to score less than two points in a matchup.

Henry became the first player to earn three best bench player awards on the bench. His 25.70 points in week 15 were the fourth-highest total of any non-starter. Since joining the team, Henry claimed his three honors in the team’s final seven weeks.

The league’s best player, Tyler Huntley (Baltimore), stepped in for an injured Lamar Jackson and proved that he was indeed an NFL-caliber quarterback. Huntley became just the second free agent to earn the league’s best player award, following in the footsteps of Michael Carter (New York), who didn’t have a team during his week eight win.

In the season’s final week, team management made two roster adjustments with little left to play for. With Kareem Hunt (Cleveland) likely done for the rest of the fantasy season, team management cut the star running back because he just hasn’t produced since returning from injury.

Next on the chopping block was Samaje Perine (Cincinnati), who found his way to the waiver wire in favor of Nelson Agholor (New England), who returns for his third tour of duty with the Bowl. Agholor is slated to return from a concussion and may sit on the bench as an insurance policy to injure a starter.