The twelveth week of Yahoo’s Fantasy Baseball covered games between Monday, June 16 to Sunday, June 23, 2019. Ondskans Imperium returned to the win column with a convincing 7-3 victory over Chod’s Team who sit right behind them in the standings.

On June 19 we picked up Cameron Maybin (OF-NYY) who was in the middle of a four-game home run streak. He stayed on the team for two days because of a calf injury that could have him out “for weeks.”

In his place, we picked up Danny Santana (INF/OF-TEX) on June 21. Sadly he’s only played once since his call off.

Aaron Hicks (OF-NYY) was pretty solid when he returned from injury earlier this month, but a sore shoulder has limited his production. We cut ties with the Yankee’s center fielder in favour of Chris Taylor (INF/OF- Dodgers). He can play multiple positions and is currently riding a bit of a hot streak himself.

In one of the tightest matchups of the season, we were able to eke out a 7-3 win. Every category was razor close and could have gone to either team after the final out. They won the runs category by two and home runs by three. We knocked in more RBIs by seven and only stole two extra bases. Batting average was won by 10 points, the second-highest point deficit of the entire week. Wins were separated by two, saves by three, strikeouts by nine. The ERA was even closer, four percentage points, while the WHIP was lost by 10.

The matchup started great in our favour then turned on us on the second day. We trailed for three consecutive days until Friday when we evened things up. Thanks to some solid pitching and good hitting we were able to break the tie and forge ahead for the victory. 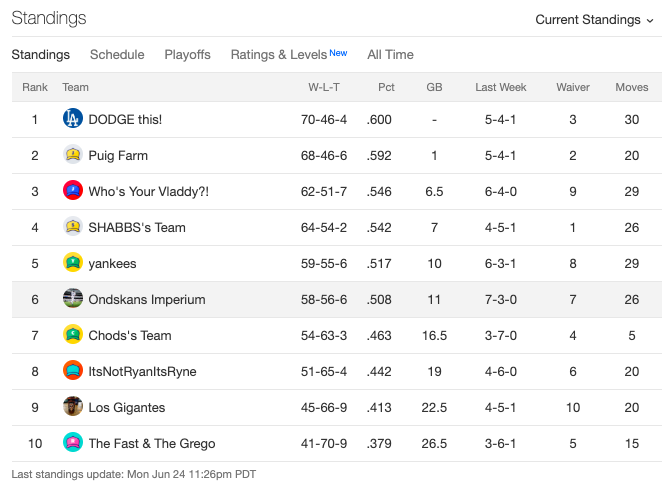 Nothing changed in terms of our place in the standings, except we gained 0.5 games on the Yankees. We got 1.5 games closer to the fourth spot but other than that nothing else changed. It would take a massive blow out loss to lose ground on Chod’s Team who sites 5.5 games behind us. Here’s hoping for more victories in the future. 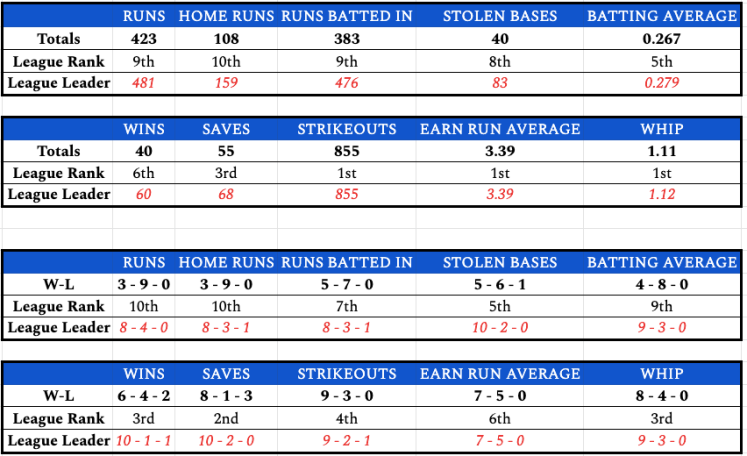 You can look at the team stats and see a handful of 10th place numbers and some 1st place numbers. Let me tell you, those 1st place spots are nowhere near safe. Except for strikeouts, our pitching staff has been slipping, and other teams are catching us. It will be interesting to see if our stranglehold as one of the top pitching staffs continues into next week.

When you add up all the bench numbers, it is sad to see we could have won the runs category by one point, but it wasn’t enough to clean sweep. Yes, that one category could be the difference between a playoff spot or not, but there is still time to make up ground.