In case you have been living under a rock recently, you should have heard Aaron Boone’s epic rant when he chewed out the umpire for making terrible calls behind the plate.

Here is the video that will live in baseball lore forever: https://www.youtube.com/watch?v=51DZxt_y1Wk. Since the moment he got tossed out of the first game of the doubleheader that day, he secured his legacy as Yankees manager. If you can’t get enough of the rant, just go online and order one of the many t-shirt designs of “fucking savages in the box” that have hit the market.

Back to fantasy baseball… unlike the Houston Astros who have all but wrapped up the World Series Championship on July 31st, fucking savages have done everything they can to purge the team of all it’s valuable assets. After 15 weeks of contending for the playoffs, management finally came to realize the season is over. While the dumpster fire burned bright all week, management decided that next year there will be absolutely zero draft preparation. It seems no matter what we have tried, we still can’t construct a playoff team. Next year’s draft strategy will be simple, draft the next best player available. If we select 13 pitchers and 5 hitters, so be it. It will really be “next man up.”

The New York Yankees have dealt with injuries all season. At no point during the season has the team been at full strength, yet they still hold a comfortable lead in the American League East. That lead is thanks to callups like outfielder Mike Tauchman. He’s been impressive at the plate with a stat line like .278/7HR/27RBI/2SB in limited playing time through the season. His numbers are better than Aaron Judge, who has also missed significant time with injuries. He joined our team on July 22.

Cameron Maybin was another Yankees player who returned from his stint on the IR on July 26. He was on fire when he got injured, so we cut ties. When management learnt he was coming back, we were there with open arms to welcome him back. He’s been really productive since his return but does get plenty of time off to stay healthy.

On July 27 closer Sergio Romo was traded from the Miami Marlins (worse team in the National League East) to the American League Central-leading Minnesota Twins. In a move simply to block someone else from signing him, we signed the closer who has had a subpar season, even to his standards. Here’s hoping for a solid end to his season and a shot at the playoffs with the Twins.

If the fucking savages were given a fairy Godmother, she would have said: “Have a great week, but make sure you are home by Thursday at midnight, when you turn back into a pretender.” We don’t know what happened on Monday or why things got so bad after Friday. They always say where there is smoke, there is fire. We must have just been smouldering all week, and Vladdy just waited for the moment to fan the flames that became an inferno that engulfed our team.

For the second straight week, we earned our participation badge. At least we still haven’t got shut out this season, which is a considerable milestone compared to how bad last season was.

If anyone contending for the division crown or playoff spot has any Yankees players on their roster, we are open for business! The trade deadline is August 11th in case you guys forget. No matter what happens over the next couple of weeks, we would be hard-pressed to finish in the last place. Back to back blow out loses destroyed any shot we had of finishing in the top four, so as long as we finish in ninth, our season would be considered a success.

It is fun to watch the top four teams play musical chairs every week. Puig Farm was in fourth place last week and now sit at the top. Things will change next week, and someone else may be there. Our week 17 opponent is SHABB’s team, so it wouldn’t surprise us if he’s in first or second place next week. 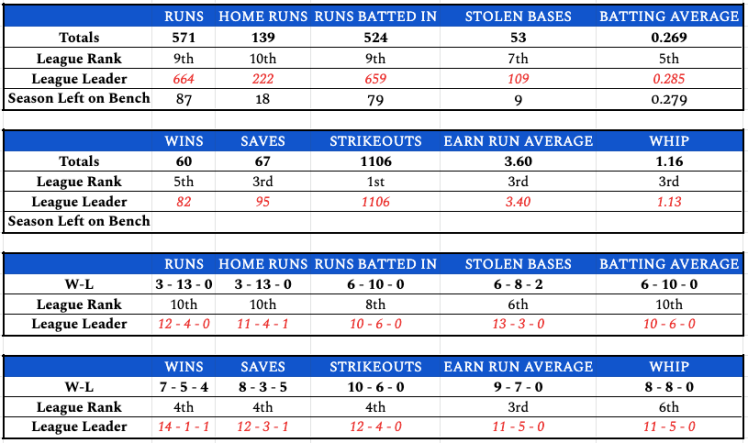 We are NOT the last-place team in the runs category anymore! Everyone in the management department deserves a pat on the back for their efforts to get us out of last. We have a long way to go in the home run department, but we may not be the worse team across the board when the dust finally settles.

Somehow we are still the number one strikeout team in the league. Since we have traded all the CY Young contenders away, we will eventually become a mediocre team in the coming weeks.

When you really look at the matchup records, some teams have had some impressive weeks. How does one guy only lose ONE pitching matchup all season?? Good for them, that’s solid drafting, smart free agent signings, and proper lineup management.

The 9-0 shutout would have been broken had we handled our bench players a little bit better. We lost the runs category by five, yet left eight runs on the bench. Home runs would still be a loss, but the RBI category would have gone our way had we not left seven out of the lineup. We never win the stolen base category, so that’s okay, and despite our best efforts, we would have still lost the batting average by 30 points.