The baseball season is winding down. A few teams in The Show still have something to play for while most of us in fantasy has nothing left. In the second to the final week of the season, a 6-4 win keeps us afloat in seventh place, but only a half-game keeps us out of the eighth place.

Since our season was all but over for weeks, we reverted back to the same formula that snuck us last year, acquire as many New York Yankees players as possible.

On August 26 we signed free agent Mike Ford, who got called up to the Yankees after Luke Voit went down for an injury. Despite a sub 0.200 batting average, this tough guy collects timely hits and recently just walked off the Oakland Athletics in a thrilling come from behind victory. He may not be on the big club for the playoffs, but he is an unsung hero so far. To make room for Ford, we dropped Tampa Bay catcher Travis d’Arnaud.

On the same day, we added Yankees reliever Zack Britton in exchange for Edwin Diaz. Diaz was one of the few remaining members of the draft class, but after an up and mostly down season, it was time to cut ties. He’s blown so many saves and had his ERA balloon up, so it wasn’t a tough decision. Amazingly he wasn’t on the waiver wire long, getting picked up the day he was available. Good luck!

While catching up on the daily headlines, we learnt that Arizona outfielder David Peralta was done for the season and opted to have surgery to fix a shoulder injury. Even though he spent a good chunk of time on the IL this season, we thank this guy for contributions this season. If he has a good recovery and can bounce back, he’d be someone we’d want to bring back next year.

After losing his closer position and blowing any game he came into, we finally cut ties with Athletics reliever Blake Treinen on August 30. In his place, we grabbed Clint Fraizer a day before major league rosters expanded on September 1. Red Thunder finally made it back to the show and let’s see if his Triple-A production comes with him.

These moves leave only Yankees reliever Aroldis Chapman and Nationals pitcher Max Scherzer as the only two remaining guys from the opening day pitching corp.

In a battle of who wants to finish in 7th place, we pulled out a 6-4 victory and led the matchup for six out of seven days. As you may have noticed, employing one team’s pitching staff (minus a few) really hurts in the pitching department. Strikeouts are way down, along with wins and saves.

Things were tight for the final four days of the series, but thanks to a few extra runs and RBIs, we were able to keep Chod’s Team at bay. 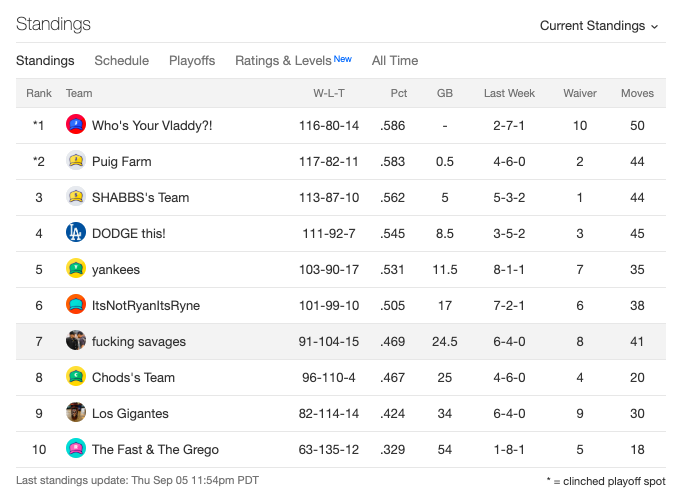 Although we are not playing meaningful games down the stretch, next week, the final week will have a lot on the line. At no point of the season have we been in 8th place, so it would suck a lot if that were our final destination. Once a promising season has now turned into a do or dies matchup for 7th overall. 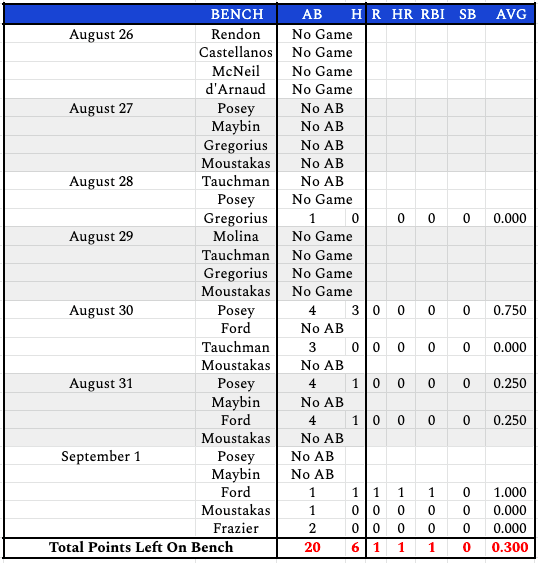 We won four out of five hitters categories, so the three points we left on the bench wouldn’t have changed anything. Week 21 has to be the least amount of points left off the scoresheet. 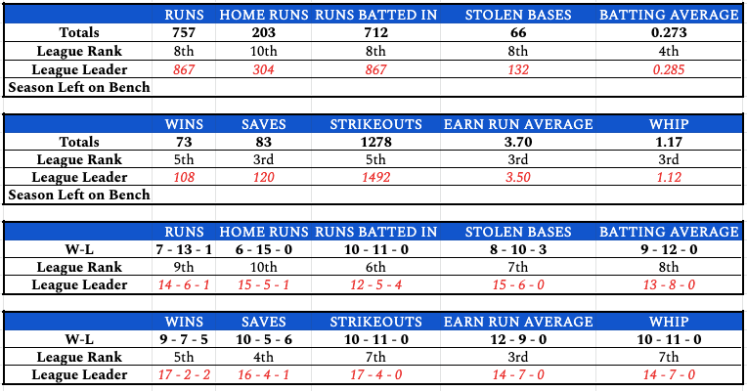 One of the plus sides of having a majority of the New York Yankees roster is the team score runs. After sitting in ninth or tenth place in all the batting, we have moved to eighth place. Our batting average has also gone up a little bit. We were in free fall for so long and failed miserably at winning the batting title.

Pitching continues to take a dive since the Yankees pitchers don’t get a whole lot of wins or saves. We continue to drop in strikeout totals but are holding steady in ERA and WHIP.