The three-game losing streak is over!

Pinstripe Bowl halted a season-high three-game losing streak with a 34 point victory over Luck’sRetirementTour. They were once 4-0, and we were once 3-0. Fantasy football can wear down, even the best teams.

Luck’sRetirementTour did not meet their projections, which wouldn’t have mattered in the end. We exceeded ours by 34 points. Had they achieved their goals, we would have still won by 26 points.

Thanks to a New England Patriots victory on Thursday night football, this matchup was never in question. We jumped out to a 54.76-0.00 lead and never looked back. Thanks to an additional 103.3 points on Sunday, we were able to secure a 33.3 point victory. 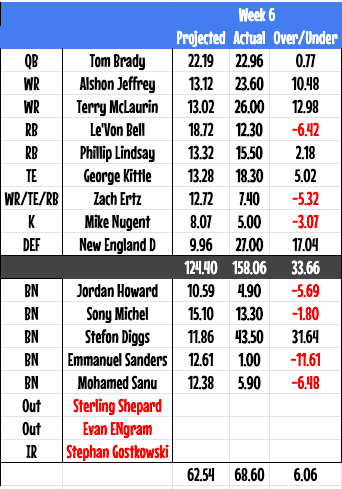 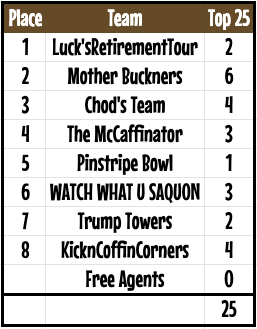 For the second time this season, we got double-digit production from almost every single player in the starting lineup. Week one was our best when only two players didn’t reach their projections.

Pinstripe Bowl smashed a handful of team records in week six. Our starters scored a season-high 33.66 points over their projections. In previous matchups, the best we achieved was +11.47 points in week two. Throw in a handful of negative weeks, and you can see how proud we were to score a season-high 158.06 points.

A handful of injuries limited the production from the bench. Except for Minnesota’s Stefon Diggs and his 31.64 points, this past week’s bench was probably going to be a trainwreck. He saved face for the guys, not in the starting lineup.

For the first time all season, there is not a single free agent left in the Top 25. By this point, all the good players have been scooped up. Tom Brady (New England) continues to be the leader of our team and our highest scoring player.

Mother Buckners are 5-1 and the top team in the league. They have achieved that record thanks to having six of the top 25 players in their lineup.

Here are the rest of the week 6 scores:

Week six marked the third straight (fourth overall) that at least one team scored less than 100 points in their matchup. Week four saw three teams fail to reach that mark. 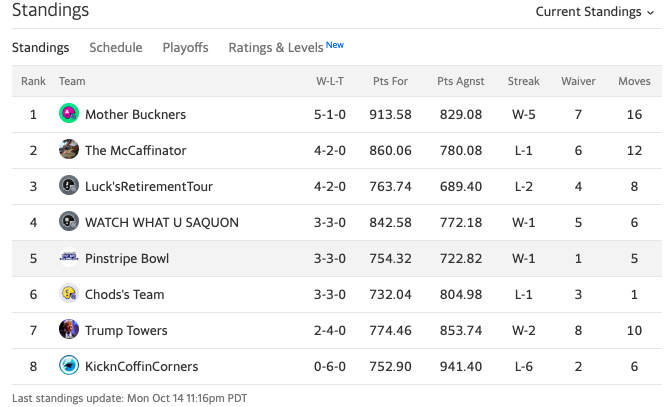 Last week we were the only team who hadn’t score 600 points yet. After 154 points in week six, we are no longer the lowest-scoring team in the league. That honour has been passed to Chod’s Team.

Our victory bumped us up a spot in the standings to fifth overall. Mother Buckners has been the leader of the pack for the second straight week. Things could get interesting down the stretch as teams jockey for a spot in the top four. Currently, only one win is the difference between second and sixth place.

Management threatens a roster shakeup, and they delivered…kind of.

After the waiver wire moves on early Wednesday morning, Pinstripe Bowl struck two deals. Steelers WR Diontae Johnson was a pick up from the week before but only scored 3.40 points for us. So after one week, we cut him. (He’s also on his bye week in week seven.) In his place, we acquired New England Patriots’ kicker Mike Nugent. He stepped into the full-time role after the season-ending injury to Stephan Gostowski. We rolled into week five without a kicker and lost that matchup by less than 10 points. It appears that a position can make or break a matchup.

In one of the more puzzling moves you’ll ever see, we cut New York Giants WR, Golden Tate. Suspended the first four games of the season, he only had 4.30 points in his first game back. The Giants faced the Patriots defence in week six, so we didn’t expect much from him. He turned in a 22.20 performance with a touchdown.

We replaced Tate with Atlanta Falcons WR Mohamed Sanu. This guy had scored double digits in four of his five starts. He seemed to be more productive than most of our receivers, so we signed him. He underperformed in his first appearance, scoring just 5.90 points in week six.

For some reason, we are still clinging to the #1 pick in the waiver wire. Not sure what we could use it for, but here’s hoping for a late-season surprise pick up to push us over the hump.