Week six in the NFL Pick’em Pool was a disaster.

You will probably wonder why I would open this post with such a bold statement. You will scroll down and wonder how I could have picked so horrible. Weren’t there a handful of guarantee wins this past week? Sure a few upsets here and there, but it couldn’t be that bad, right?

Well, with my mind fully engaged in the MLB playoffs and the New York Yankees chase for 28, I never submitted my picks in week six.

Since I didn’t get a single point, my team has now dropped to the bottom of the league. Three points out of sixth place, six points out of fifth, and thirteen out of first. This huge miscue may have cost us our season and any hope we had to claim the prize.

Once Upon a Time in NE Picks

We uploaded our lack of picks as a reminder of how stupid we can be at times.

Below you will find out who we would have picked in week six. Instead of comments about the game, we will provide some sarcastic one-liners to keep you entertained. Enjoy!

The Patriots didn’t lose, and I don’t think anyone expected them to.

Who knew there was life without Cam Newton.

Cleveland is gonna win a championship before 2100.

Kansas City was supposed to challenge New England, not lose back to back weeks.

Miami may win a game in 2019. It appeared this was the closest they’ve gotten so far.

I have a bunch of Eagles on my fantasy team. They can be impressive… at times.

The Saints need Drew Brees back to contend.

The Bengals may not win a game this season…unless they play Pittsburgh again.

Who picks Atlanta these days?

Denver had one win. Tennesse is hit and miss. Two strikes and I was out.

If you look at our projected 10-4 record from week six, we would have finished in the top three that week. Ten points would have also moved us to fourth place, three points out of first place. 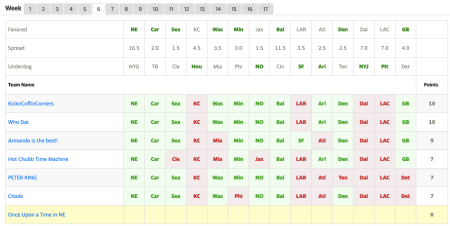 Stay tuned for next week’s picks!