By the time Monday Night Football rolled around, it really wasn’t in question either. Yahoo Fantasy labelled it a “come from behind victory.” We were only “behind” because four of our critical starters didn’t play until the final day of the matchup.

The great thing for us was the boys, in fact, came to play. The New England Patriots beat down the lowly New York Jets and pitched a shutout in the process. Thanks to a boatload of points from that one game, we went back over 0.500 and jumped up to fourth place!

Personally, we love that Yahoo gave us a “D” for our victory. Maybe that “D” represented the New England Patriots defence, who led the way for us. Their 25.00 points were best on the team.

We headed into Monday Night Football down by 40+ points with four players in the game. If you count New York Jets running back Le’Von Bell, we could have had five. Instead, we decided to sit him, and that proved to be a wise decision.

Tom Brady, Sony Michel, Mike Nugent, and the Patriots defence just needed to score 10 points apiece to secure the victory. Nugent (7.00) was the only player who didn’t crack double digits, while Michel (22.40) and Pats defence (25.00) carried us to victory. Brady chipped in 13.96 points to give us even more breathing room.

Our 88.86 points are the lowest point total for a victorious team this season. We totally beat the previous record of 101.18 held by Chod’s team. Meanwhile, the 66.86 points scored by KicknCoffinCorners is a season-low for all teams. 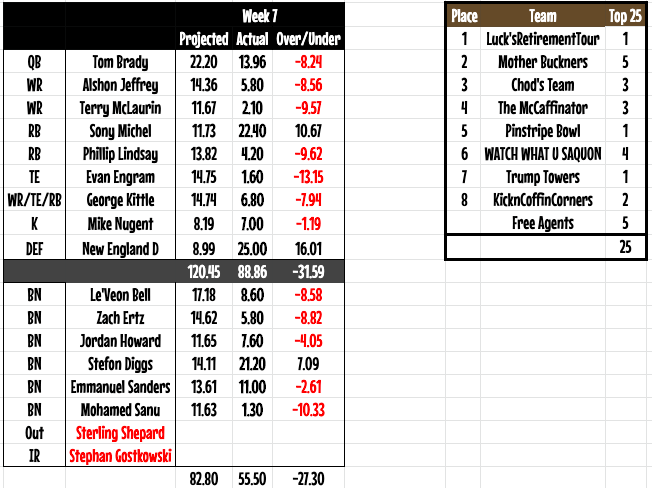 Our week seven grade reflects on the fact that only three players on the entire roster managed to meet their projections. The starters were a -31.59 against their forecasts, while the bench wasn’t far behind at -27.30.

Stefon Diggs (Minnesota) was impressive for the second straight week. The day he returns to our starting lineup is the week he’ll go back to scoring in the single-digits.

Things just got interesting for two of our bench players. Mohamed Sanu just got traded to New England, and Emmanuel Sanders got traded to San Francisco. We never had thoughts of parting with these two guys, but keeping them on the bench could turn in our favour in week eight.

We can blame the poor play of the Philadelphia Eagles and New York Giants for some of these negative numbers. Then again, this shows that you can’t collect a bunch of players from the same team.

There were zero free agents last week in Top 25. Things changed in a hurry as five players made the leap. Low scoring games really hurt the seven other teams in the league as they lost a handful of guys off the list.

Brady remains our only player in the Top 25.

Here are the rest of the week 7 scores: 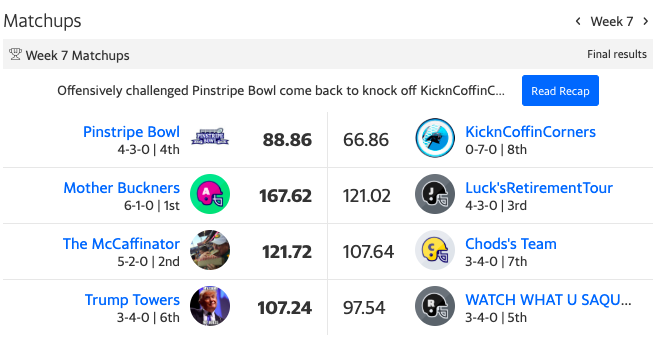 We would have lost to every other team in the league except KicknCoffinCorners. Good thing we didn’t play Mother Buckers, they would have easily doubled us up. We beat them in week one and play them again in week nine. Something tells me it won’t be the same.

It may only be the halfway point of the season, but the last place has been secured.

Second place through the seventh place is a toss-up. Two wins and two losses are all that separate seven teams from securing a playoff spot or having a losing season.

The first place is there for the taking but appears to be a long shot. Mother Buckners are an impressive 6-1 and have a +131.20 scoring differential. If you look closely, they also hold a 99.52 point cushion in the points for/against category over second-place McCaffinator.

Three teams have negative points for and points against records.

Things were pretty quiet this week. No roster moves were made.