In week eight of the hockey season, everything that could go wrong went wrong.

If you missed the headlines, you might not have heard that Marc-Andre Fleury lost his dad during the matchup and left the team for personal reasons.

Since we are not able to adjust our lineup accordingly, his absence cost us dearly. Not that our offensive players picked up the slack or anything, it’s just we didn’t qualify for the goaltender minimum, so by default lost all four categories.

Since our goalie statistics don’t count, we will only dissect the six-player categories.

Our two points came courtesy of goals and shots. We managed to keep everything else close except power-play points (as usual).

We lost assists by four points, the plus/minus by two, and penalty minutes by six.

For the first time this season, we never led during the matchup. We cut into HANDZUS JOB’s lead in the middle of the week, only to see all our hard work fade away by Sunday. 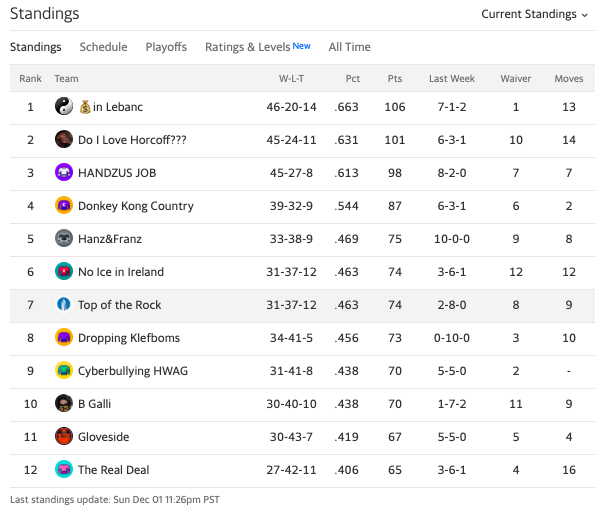 Thanks to a 0.463 winning percentage, we dropped yet another spot in standings. We are tied with No Ice in Ireland with identical records, but since we were terrible in week seven, they get the nod.

Our merger point total is only hurting more and more as the weeks pass by. Money in the Bank now has a 32 point lead over us. We don’t want to be in the fifth or sixth seed, only to draw one of the best teams when the playoffs roll around.

Last year we were the worse team for the entire season. With a four-game losing streak, we are only nine points away from the basement.

A bad week in the plus/minus took us a step back from the ground we’ve made in the previous weeks. We hopped up another spot in goals for, while we remain the best and worse team in the other four categories.

Even though our goalies didn’t play out to their potential in week seven, Tuuka Rask’s (Boston) numbers bumped us up in a few league categories.

We are the team to beat between the pipes. Now, if only the goal scorers could do their job and turn this ship around.

No one we left on the bench would have altered the final outcome of the matchup.

The only thing that could have changed was if Alex Georgiev’s one shutout victory had been in the lineup. That one game would have helped us meet the three-game minimum, and we could have easily turned that 8-2 defeat into a much nicer 6-4 loss.

After numerous losses in a row, it was time for management to do a roster shakeup.

December 1, 2019 – Anthony Mantha went on the IR with an injury that will have him out for weeks. That opened up a roster spot, and we signed free agent left winger Chris Kreider from the New York Rangers.

The blue shirts have four games during the week nine matchup, and we could use his help in collecting points.

December 1, 2019 – Jack Hughes also went down with a lower-body injury. Since the New Jersey Devils are by far the worse team in the NHL, it was time to cut ties with the rookie.

In his place, we signed Colorado centre Nazem Kadri. The Avalanche play the Boston Bruins in week nine, so Kadri has the opportunity to rack up the penalty minutes. He’s also a plus player, something we need.