Adam’s team was all over us and schooled us in a bunch of categories, causing another drop in the overall standings.

The final score, 8-1-3, was a little messy to sort out for ourselves.

Thanks to being outscored by three goals and ten assists, we lost points by 13. Throw in a plus/minus difference of 25, it was tough to really put up a fight. They also beat us by four power-play goals.

Neither team collected a game-winning goal, and both sides fired 100 shots on goal. We managed to claim our only offensive category, thanks to 23 more hits.

For the first time this season, we lost the wins category. We have come close a time or two, but week 13 proved to be our worse goaltending record of the season. The final numbers were miserable as it was, but we lost the GAA and Save % by only 0.30.

The matchup started out with a bang for the Heroes. An 8-0 led turned into a one-goal contest for a few days before things got way out of control. 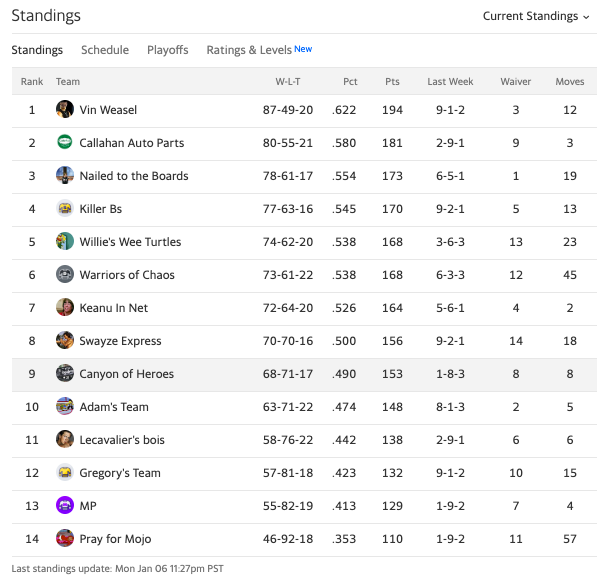 After our fourth straight loss, we remain in ninth place, but the gap is widening. We now sit 15 points out of a playoff spot and 41 points out of first place. It was only a few weeks ago that we were sitting in fifth overall. 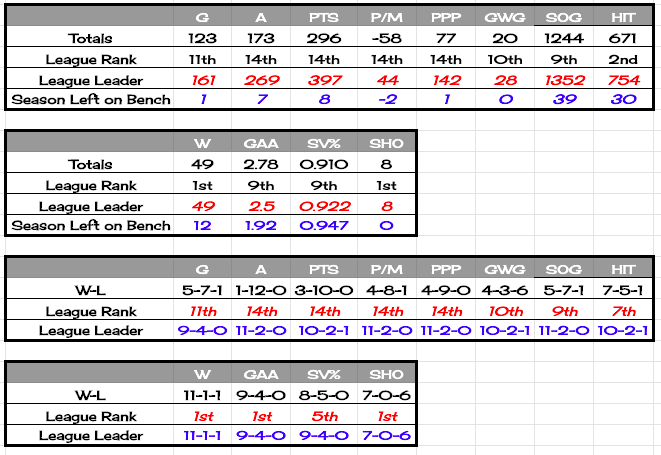 Since our last write up, week 12, we are now the worse team in terms of plus/minus. So for those of you keeping score at home, we rank dead last in four of the eight offensive categories. Things only get worse since we rank 11th in goals and 10th in the game-winning goals. The two groups we actually contend in are shots and hits.

Thanks to five goalies on our roster, we continue to pace the league in wins and shutouts. Our GAA and Save % are only getting worse as the carousel spins guys in and out of the crease.

Since we suffered our worse defeat of the season, the reinforcements on the bench would have done nothing to help us.

The only regrets we have are not suiting up Martin Jones and Henrik Lundqvist, who were superb in their two appearances. Even though neither collected a win, their playing time could have helped our overall stats, which continue to drop.

Canyon of Heroes made no roster transactions during their week 13 matchup.