The week 16 matchup was a two-week adventure. Thanks to the NHL All-Star game, fantasy owners had a total of 14 days to secure a victory.

Top of the Rock extended it’s losing streak to three games, thanks again to not qualifying in the goaltending categories. One would think that out two starting goalies would have combined for three starts in two weeks, but every team had a “bye” after the All-Star Game, which wreaked havoc on many teams goalie tandems.

As we dwell in the last place for the second straight season, our matchup record stands at 5-10-1.

Goaltending cost us another opportunity to gain some traction in a matchup. Since we failed to meet the requirements, Donkey Kong Country was able to Swope in and collect four free points. The saddest part is we would have still gifted them three points but would have stolen a tie in the shutout department.

Since week 11, we have won or tied the goals scored category. It has become a strength; meanwhile, our most significant weaknesses, power-play points and assists were lost by one and two points respectfully.

We won the shots on goal category by 12, which improves our overall record in that category 12-4 on the season.

Management has to wonder what could have been. Top of the Rock held a 6-3-1 advantage headed into the extended All-Star Game break. It was all downhill from there when teams returned to action the following Monday.

We managed to pick up an extra point by the time the weekend rolled around, but we also conceded another point too. 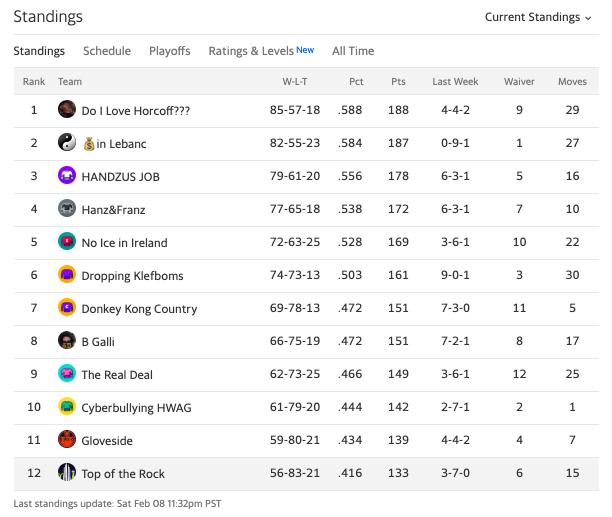 As week 16 comes to a close, we are reminded that there are only four weeks left in the season. The playoffs are not in our future, and neither is the first overall pick in next season’s draft.

Then you will look at how successful we’ve been in matchups. Compare those total numbers to our win/loss records, and you can see that we are one of the worse teams. It’s amusing to see such a contrast. We can only save face in two categories, penalty minutes and shots on goals. Despite being the worse team in regards to assists, we have the ninth-best matchup in that department.

Our goalies may be elite, but they sure pick terrible times to win and lose. Our matchup numbers in those four categories are at or near the bottom.

It is tough to build a contender when you have a hard time closing out opponents and collecting valuable categories for the victory. 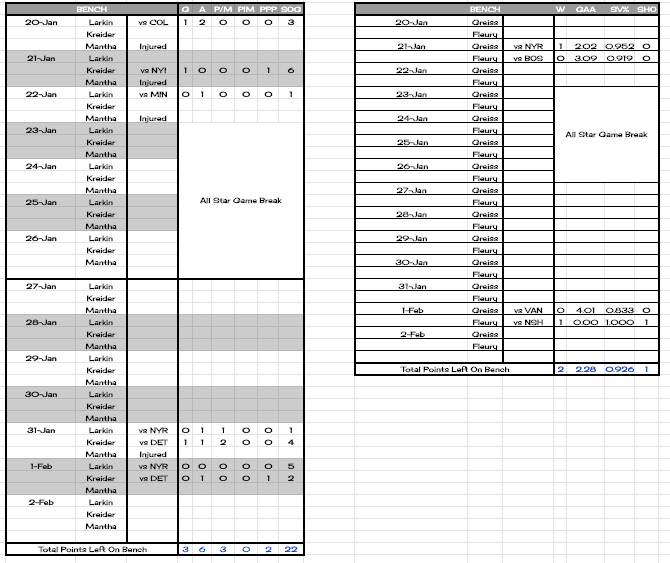 Our week 16 bench players would have made things really interesting, had they played.

If you factor in six assists, we could have won that category 17-13. Amazingly we didn’t leave a single point in penalty minutes on the bench. What is extremely rare is the two power-play points that went unclaimed. They could have given us a 6-5 win, thus altering the offensive categories 5-1 and changing the final score to 5-5.

Now, if you factor in the goalies who didn’t get a start, we would have met the minimum requirements, once again altering the final score. Despite our best efforts, we wouldn’t win the wins category either way, and it is hard to factor in our goals-against average and save percentage. Unofficially we tied the shutout category 1-1, but if you add in Marc-Andre Fleury’s shutout, we would have won 2-1, and the final score could have been 6-4 in our favour.

We did not make any roster moves during the two-week matchup.