This two-week matchup was divided up by the NHL All-Star Game. Those 14 days allowed for five different lead changes, which resulted in a 6-6 tie.

After four weeks of sub-par goaltending, our five-man rotation finally came through and secured us four points. As for our offensive players, they failed to help us even points to win the matchup.

When we start to dissect everything, some categories were won or lost by less than five points. Goals were separated by two points, and assists were four points, which meant we lost points by six. In terms of plus/minus, we finished even at 0 before we secured power-play points win by three. They scored one more game-winner than us, but we collected five extra shots on goal. After that, we conceded the hits category by four.

Like we mentioned in the opening, this matchup could have gone anybody’s way. There were five lead changes before it was all said and done. Each team had their opportunities to sweep this away, but when the final buzzer sounded, there was no clear cut winner. 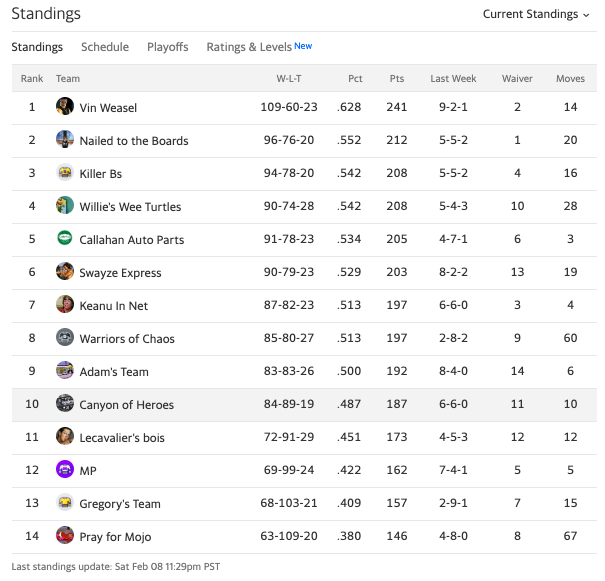 Our first tie of the season kept us in 10th place overall, five points behind the next best team. The playoffs remain a long shot (16 points), and first overall (54 points) is not even an option anymore as the season comes to a close.

We did not keep up with the team stats in week 15, so they return this time. To give you the best comparisons, we’d have to dig those numbers out from previous weeks. Instead, we will just get to the heart of the problem.

There are eight offensive categories, we rank dead last in four of them (50%) and are almost at rock bottom with another one. After that, we sit in 8th and 9th, followed up a top-five spot in third place. If you think your fantasy team sucks, just take a look at ours.

Meanwhile, people mock us and think we are crazy about our five goalies. However, we remain the number one team in terms of wins and shutouts, both areas we will not lose ground on in the final weeks.

When you break down the matchup records, our offensive numbers are even worse, with seven out of the eight categories ranked between 10th and 14th place. Our highest ranking is 7th, and that’s only in one group.

Our goalies are the cream of the crop with two first-place rankings, one-second place, and one-seventh overall. 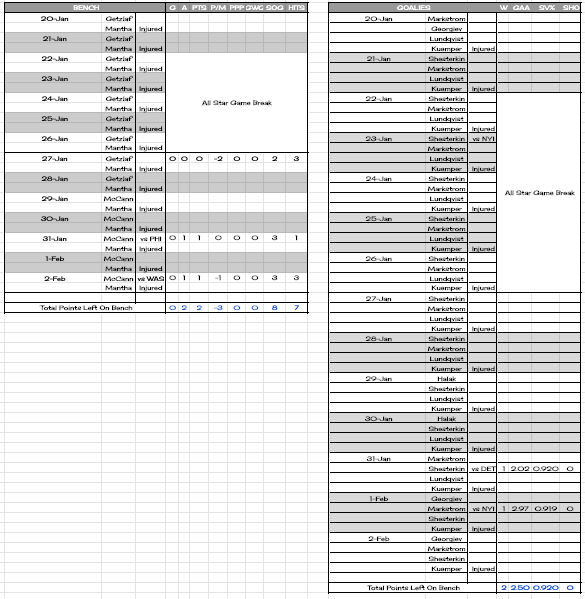 When you find yourself in a tie, you’ll search for whatever it was that could have given you an advantage and a victory.

Our magical number was hit. Thanks to having an abundance of forwards, a handful of them had to sit. They combined for seven hits, which would have given us 44 for the matchup and the category by three. That alone could have tipped the scales in our favour and notched us a 7-5 victory.

We won all four goalie categories, so the only difference with our bench players would have been our final numbers. The outcome wouldn’t have changed, but there wouldn’t have been such a massive gap between the winner and loser.

Canyon of Heroes made no roster moves during their week 16 matchup.