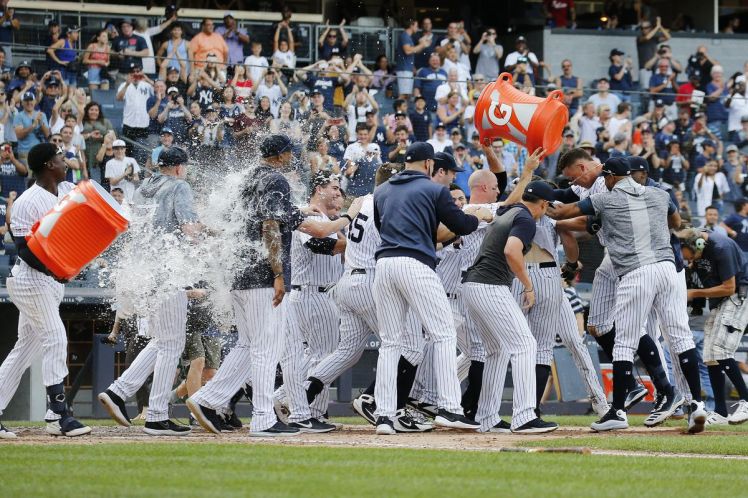 We didn’t finish in the last place! That is totally worth celebrating!!

Fantasy baseball finished up with a 9-0 blow out loss to the defending league champions ItsRyanNotRyne. Neither one of us made the playoffs in 2020, so we met in the first round of the consolation bracket. The playoffs are not what this post is about. This particular write up is going to break down the entire 22 week season.

In the first section, we will dissect our record. Ondskan Imperium finished three games over .500 with a 110-107-13 record in 2017. We finished 20.5 games out of first place and made 56 roster moves, second-most in the league. If you read the 2018 season recap, then you would know we were a league worse 58-144-18. That team made 24 roster transactions, which was the fourth-least in the league.

When the 2019 season came to an end, we finished in eighth place with a record of 91-113-16. Our 45 roster moves were in the middle of the pack, fifth overall. Imperium was shut out (0-9-1) twice this season, an improvement from three from 2018. This year, we were the only team with a perfect 10-0 week, which came in week two against the Yankees. No other team pitched a shutout since we tied one category (0-9-1) in both of our shutout losses.

Imperium’s matchup record for 2019 was 8-11-3. Here’s the breakdown on how we faired against the nine other teams based on their final position in the standings.

You will not be successful in any league sport if you have a winning record against only three of the nine teams.

Let’s dig a little deeper into the numbers that matter the most.

We won the runs category in seven matchups with the majority of them from week 17-22. There were two ties and four wins in those final weeks. We managed six home run category wins with back to back in week 17-18. After the trade deadline, we improved our RBI wins with three straight from week 19-21 to finish with 10. Somehow we won eight stolen base categories, which came in bunches. Victories in weeks 2-5, weeks 11-12, and weeks 18-19 made up most of the totals. Our goal was to win the batting category every week but finished with just nine wins. A three-peat from weeks 12-15 and back to back in 20-21 boosted the final numbers.

At the beginning of the season, we had the best pitching staff in the league. In the first two weeks, we were almost untouchable, going 10-0. Those weeks laid the foundation for many more wins in the weeks to come.

When it came to strikeouts, we won the category in 10 of the first 13 weeks. After the trade deadline and purge of elite talent, we never won the strikeouts category again.

Thanks to an impressive season from New York Yankees closer Aroldis Chapman, we managed to stay in the hunt every week for saves. Our 11-6-5 record shows that we were always a threat to close games.

We were a much better team in terms of ERA than WHIP. Our 12-10 ERA records show we could keep the scores low, but the WHIP category was pretty much a lost cause after week 10. In the final pitching category, wins, we finished 9-8-5.

You can tell we were heavily focused on weekly pitching matchups since we tied 12 categories across the board. That number more than double (5) the amount of batters categories we tied.

Yahoo likes to crunch the numbers with more joy than we do. Right after the draft, they compiled all their projections and let us know how good or bad our team will be. Ondskans Imperium was supposed to be the fourth-best team in the league. After the free-fall in the standings and the massive fire sale at the deadline, we came in four spaces behind that projection. Here is the breakdown of all the categories.

Our season was lost due to a variety of reasons. When we look back at what could have been, there is one decision that really hurt our team more than anything.

New York Yankee infielder DJ Mathieu was drafted in the 7th round (227th overall) by Los Gigantes. On March 25th, he was dropped into the free agency pool. After collecting a few hits, we added him to our lineup on April 11th. While on the team, his batting line read like this: 4/22, three runs, zero home runs, two RBIs, zero stolen bases, and a miserable 0.182 batting average. We dropped him nine days later on April 20th.

In reality, LeMahieu was a threat to win the American League batting title all season. He could easily be considered the Yankees team MVP, all while setting career highs in hits, RBIs, home runs, and multi-hit games.

We cut him after a miserable nine days. He was reclaimed by Los Gigantes on May 18th.

Now that we have stopped crying over that transaction. Let’s break down the players who we drafted way back in April. Max Scherzer was our first pick, second overall, and stayed from day one until the end. The only reason why the starter stayed was that we couldn’t drop him or trade him, per Yahoo’s roster rules. We traded CY Young winner Justin Verlander (144.2 inns) and finalist Gerrit Cole (129.2 inns), as well as ace pitcher Noah Syndergaard (89.0 inns).

We finally cut ties with Edwin Diaz (47.2 inns) and Blake Treinen (54.1 inns), who just imploded down the stretch in their closer roles. Chapman (54.1 inns) and Buster Posey (330 AB/74 PTS) were the only other players who stayed with Scherzer from draft day to the end of the season.

We eventually dropped Nicholas Castellanos (450 AB/141 PTS), while Scooter Gennett (4 AB/0 PTS) did little to nothing for us. David Peralta (317 AB/100 PTS) and David Robertson (6.2 inns) had season-ending injuries, while Ender Inciarte (35 AB/4 PTS) didn’t make through the first month. Elvis Andrus (480 AB/157 PTS) hung around most of the season before being dropped.

Trey Mancini (298 AB/106 PTS) stayed around while he was hot, then got dropped when he went cold. Our very last pick of the draft, Brian Anderson, didn’t even make it to opening day.

Marcus Stroman (111.2 inns) was a free agent pick up who got traded for Masahiro Tanaka (54.2 inns). Domingo German (73.0 inns) and J.A. Happ (53.0 inns) were also brought in through trades to bolster the pitching staff.

Didi Gregorius (212 AB/88 PTS) was our highest scoring free agent signing, while teammate Mike Tauchman (121 AB/56 PTS) produced until a season-ending injury took him away from us.

We all know that baseball is a long season, and there are many highs and lows during 162 days of summer.

In the four charts below, you will see who our best players were and who the worse ones were. 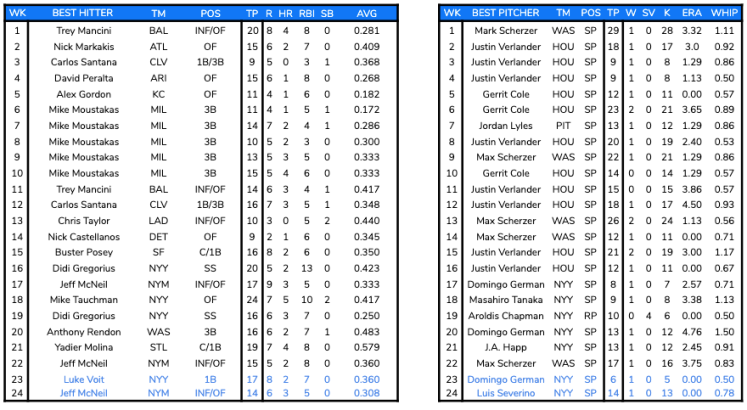 As mentioned earlier, Moustakas was our best player, collecting five team-best hitter awards, all in a row, week six to week ten. In second place was McNeil, who was our best hitter in three weeks, all towards the end of the season. Behind those two were Santana, Mancini, and Gregorius, who all notched two wins of their own.

On the mound, Justin Verlander was leaps and bounds the leader of the pack. The Astros pitcher was our best in eight of the 24 matchups, which equalled 33% of the award total. His old Tigers teammate Max Scherzer was next with five weekly titles. Two other pitchers from the American League tied for three awards apiece, Gerrit Cole and Domingo German. It is safe to say that those four pitchers dominated for us, accounting for 19 of the 24 awards.

On the flip side, every week, many of our star players underperformed. We kept track of the guys who had regular reps in the starting lineup but failed to make the most of their situations.

Buster Posey may be our favourite player who doesn’t play for the Yankees, which meant we gave the San Francisco catcher a lot of ley way on the field. He repaid us by racking up three worst hitter awards. McNeil and Castellanos were the only other players with more than one appearance on the list.

If you remember from an earlier paragraph how bad our relief pitching us, you wouldn’t be surprised to see how the list is jammed packed with two of our worse players. Blake Treinen and Edwin Diaz were supposed to be great this season, and well, both went to destroy their future opportunities on the rubber. Both players collected five worse pitcher awards while Stroman had three of his own while still in Toronto. Chapman and Cole, despite their success, had two of their own.

Ever since we started to play fantasy sports, we have to come to realize that every single matchup is decided by those who play and those who don’t. In countless articles written on this site, we continue to hammer that point home because sometimes those numbers tell the story.

During the 2019 baseball season, we had some great players who didn’t contribute on the scoresheet and in some weeks, we were thankful these guys didn’t get out on the field.

Each category shined at various points, but week 18 appeared to be our best week left on the bench. If you were wondering, we lost that matchup 6-4. The bench went on to compile a 0.250 batting average with 18 runs, eight home runs, and 14 runs batted in. Throw in 22 hits at 88 at-bats and one stolen base.

Those numbers were our best as a weekly group, but other weeks were better. In week one, we left four stolen bases on the bench. Our best batting average was in week 24 when we went three for six and a 0.500 average.

We had several weeks with little to no production left on the bench. Week nine was the perfect example since we left zeros across the board.

Our draft strategy was simple, secure elite pitching to win those five categories every week and then win the batting average to win every matchup 6-4. Instead, things didn’t go as planned, and we blew up the whole experience at the trade deadline. As we look back at what could have been, we are left to wonder what it will take to win in fantasy baseball.