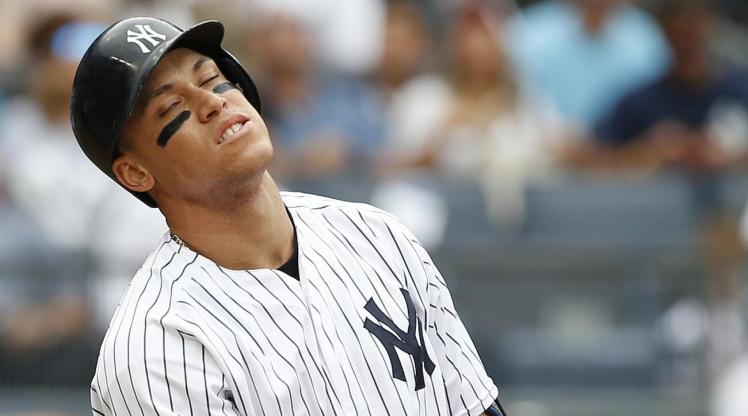 Have you ever played fantasy sports with your heart instead of actually using logic? During the summer of 2018, I decided to define all conventional wisdom and draft my fantasy baseball team with just players from the New York Yankees.

The Yankees finished as one of the best teams in all of baseball while breaking the home run record. They could also have a finalist for Rookie of the Year. My one team concept could work based on the calibre of the team (face it these are not the 2018 Baltimore Orioles), but in the world of fantasy sports, this was indeed a very terrible decision.

My draft strategy was pretty simple, and I was able to collect every player who suited up for the Yankees except Giancarlo Stanton. He was drafted with the third overall selection, which forced me to take Aaron Judge at number five. I followed with the following choices Gary Sanchez (2nd round), Luis Severino (3), Aroldis Chapman (4), Masahiro Tanaka (5), Didi Gregorius (6), Sonny Gray (7), Greg Bird (8), David Robertson (9), CC Sabathia (10), Brett Gardner (11), Dellin Betances (12), Aaron Hicks (13), Neil Walker (14), Jordan Montgomery (15), Brandon Drury (16), Tyler Wade (17), Miguel Andujar (18), Roland Torreyes (19), Austin Romaine (20), Chad Green (21), Clint Fraizer (22), and Jacoby Ellsbury (23). Most of you could admit that I put together a decent team of players considering Gleyber Torres wasn’t even on my radar on draft day. Thankfully I was able to pick him as a free agent on April 21, some 19 days after the regular season started.

As the season progressed and the trade deadline(s) came and went, I missed out on acquiring J.A. Happ and Andrew McCutchen. Both players were actually on the same fantasy team, and since the Yankees did not cut any big names from my fantasy roster, I wasn’t able to trade for them. I was able to pick up other mid-season acquisitions like Zach Britton off waivers while Luke Voit, Adeiny Hechavarria, Lance Lynn were all free agents.

Throughout the season, I made 24 moves, fifth highest in my league. The Yankees called up several prospects like Justus Sheffield, Jonathan Loaisiga, Domingo German, and Kyle Higashioka while giving opportunities to veterans like Tommy Kahnle. It was tough to fill in all the gaps, especially when people got called up one day and they were gone the next. I was only allowed four roster moves a week, so thankfully the big club didn’t fall apart, or I would have gone over the limit several times over.

Now let’s get to the real reason why you’ve read this far: the numbers. The Evil Empire (my team name) finished the season a depressing 58-144-13 for a sparkling 0.305 winning percentage and 63.5 games out of first place, in an eight-team league. To put those numbers in perspective, the first overall team finished 125-84-11 (67 more wins) for a 0.593 winning percentage. The top four teams in the league made the playoffs, with the top six teams winning 100 or more categories and seventh place finished with 98 wins. Realistically I only needed 48 more wins to even have a shot at making the playoffs, something I have achieved in other years.

Now let’s hypnotically say I had the full Yankees lineup all season long. Against the all-star selections of the seven other teams in the league, here’s where I could have finished with the MLB Yankees numbers: fourth in runs, first in home runs, third in RBI, eighth in stolen bases, and eighth in batting average. From the mound, we would have been finished fifth in wins, sixth in saves, second in strikeouts, seventh in ERA, and eighth in the WHIP.

There were times during the season when the Yankees rode a winning streak of multiple games, but you could never tell in fantasy baseball because a 2-1, 3-2, and 1-0 win don’t equal mind-blowing fantasy stats. Everyone slumps and very few players explode with enough power that lasts through an entire seven-day fantasy match up.

To make things more interesting, I calculated the statistics of the few players I never had, McCutchen, Happ, and Staton. After the new numbers emerged, The Evil Empire was still not a playoff team but managed to improve their win total by 29 and their matchup totals by five.

After an opening week tie, the Evil Empire went on to lose seven straight matchups to move in the basement of the league, where they stayed until the end. The only win of the season came in Week 9, followed by a tie in Week 10. Things appeared to be on the rise, but they lost 11 out of the final 12 matchups to finish the season a combined 58-144-18 with a series record of 1-18-3.

When you factor in all those other numbers, the story of the Evil Empire would have been much different. Instead of a tie in week one, they would have won the matchup 5-4-1. The team would be 3-2-0 after five weeks thanks to two losses and then two wins. A tie, win, and defeat would keep things around the .500 mark before two more wins would put the fantasy team at 6-3-1. Things would go south after Week 10 as the club would manage only five ties in the last 12 matchups to finish the year at 6-10-6. In the statistical categories, the final numbers could have been 87-117-16.

These numbers only reflect the three Yankees players who played on other teams. No one else in the league played Kyle Higashoika except for me, and I didn’t always bring him up or have in my lineup. My final numbers could have been better if I had A.J. Cole in my line up whenever he randomly got the call from the bullpen, or if I simply paid enough attention to the pitching matchups. I was curious about the impact these particular players would have had for my lineup. There was no way for me to get McCutchen or Happ, but I did offer to pay the league fees ($40) for the guy who drafted Stanton.

I really wanted to see how I could pull off a whole season with just one baseball team. We all know by now that my team sucked and that my strategy was worse than Oakland’s Moneyball one, but I actually didn’t finish in the last place. The Evil Empire won the 7th/8th place matchup 5-4-1 thanks to a hot streak by the Yankees towards the end of the season, so the history books will say I didn’t finish in the last.

If you are curious about my plans for next year, I may try for Judge or Torres, but I doubt I would pursue any other Yankee. It is clear if you want to win 27 world fantasy champions, you need to create an all-star team that competes all season and not for one weekend in July.