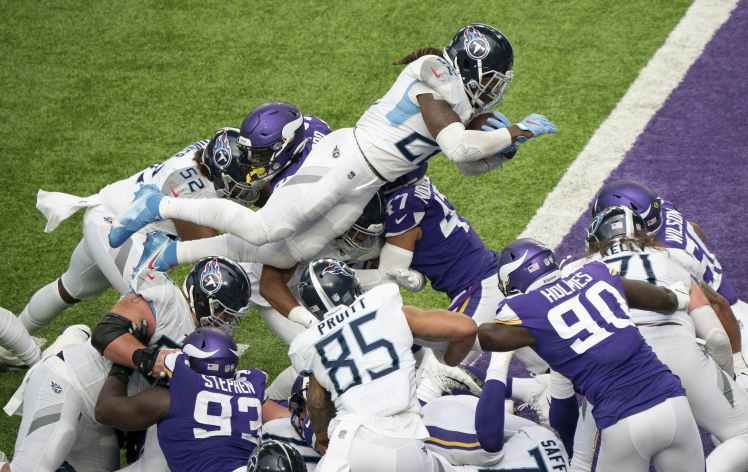 If there is one thing we have learnt from almost a decade of playing fantasy sports, we usually end up as the league’s punching bag. Pinstripe Bowl dropped their second consecutive contest, to the winless Nukl Busters, giving the new team their first victory in history.

The worse feeling of the week may not be that we lost to a good friend, the same guy who recently just won our fantasy baseball championship, but the fact we were projected to score 137.27 points and only managed to collect 109.70 instead. As the 6.75 favourites to win the matchup, the 40.68 defeat is a tough pill to swallow. 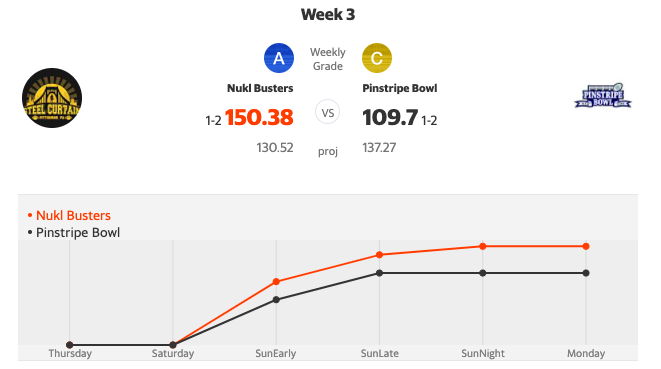 For the second time this season, our matchup didn’t produce any points during Thursday night football. By the time the first round of games were done on Sunday afternoon, Nukl Busters had jumped ahead and only padded their lead in the nightcap.

We could tell that as the scores started to trickle in, the tide had turned on us, crushing out surfboard in the process. The Bowl was never able to regain momentum and rally to meet their projections.

All the points during the matchup were scored on Sunday.

It really doesn’t matter what fantasy sport you participate in; if your starters fail to meet their projections, you will not win anything. In week three, only three of our nine starters managed to meet or exceed their points. When you look at the numbers, Murray, Henry, and the Cincinnati defence managed to score a combined 10.12 points over the projections. Our bench players were a bit better in this department, where three out of the five went above and beyond their expectations.

There was a lot of shuffling in regards to the Top 25 scorers in the league. After week three’s action, there was only one Team, KerryMy Johnson, with four top players. Surprisingly, there are currently four free agents within the 25. Six teams have two players, including our beloved Pinstripe Bowl (Kyler Murray and Stefon Diggs); meanwhile, only two teams only have one player.

Lamar, the Merrier! never seems to skip a beat, registering the highest weekly total for the second straight week. KerryMy Johnson also scored 170+ points, while two teams compiled over 150. Chod’s team collected their second win thanks to the lowest win total of the week, 116.22 points. Only one team failed to reach the century mark, becoming the second team to accomplish the feat in this short season. 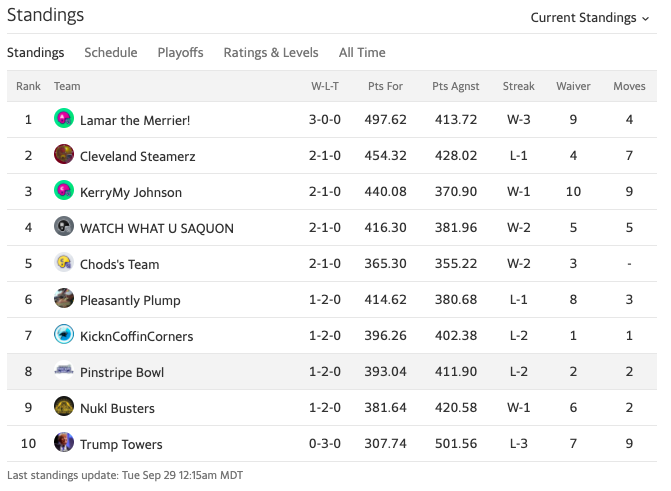 In case any of you were keeping track at home, Lamar the Merrier! have won 16 of their past 18 games. They remain the only undefeated team and will be the first team to rack up 500 points on the young season.

Pinstripe Bowl dropped down a few spots after their second loss, which leaves them at 1-2 and in the eighth place. Four teams are 2-1 and 1-2, while Trump Towers remains winless after three weeks.

The saddest aspect of our best starter (Henry) and best bench player (Golladay) is their totals equalled Karmara. You can not be successful if your best players don’t compete with the best player in the league weekly.

To gather a few more points from the special teams, we made our first moves of the season. Before anyone can question us about why on earth we selected Cincinnati over any other defence available, they did have a favourable matchup against the Philadelphia Eagles. Unfortunately for us, the Eagles showed up to play and rallied late for a 23-23 tie.