When historians look back at our franchise, there is one tread that will stand out more than any other: losing.

It doesn’t seem to matter what season it is, 2017, 2018, 2019, or 2020, the losses continue to pile up, and our ability to win matchups isn’t there. Even when we develop a strategy or blow up that strategy, the results are always the same.

We finally broke the mould in football (league champions), and we finally reached the top of the mountain (playing for the championship). Hopefully, someday those good vibes make their way to the baseball diamond.

While watching the New York Yankees the other day, the commentators mentioned a statistic that MLB produced the lowest record batting average in the game’s history. Some could bulk at that number because it is hard to believe a day worse than they mentioned. However, when you look at our weekly numbers, we are living proof that it was a terrible week for hitters.

Despite having five extra games on the schedule, we were out hit across the board and owed our four-category wins to our pitchers. The only offensive category we won was stolen bases, an unusual feat for our team.

The hurler’s numbers were pretty solid, and only one category (wins) was decided by one point, 4-3, in favour of our opponents. Week three marked the second week in a row that we tied the saves category 3-3.

The daily scoreboard wasn’t a shutout for our opponent’s Bad News Bears, but it was pretty close.

Even though the final score wasn’t in our favour, we kept most of the matchup close, only trailing by two categories on Thursday and Friday.

We gave the Bears a run for their money and tried to stress them out, yet our hitters just never lived up to their potential. 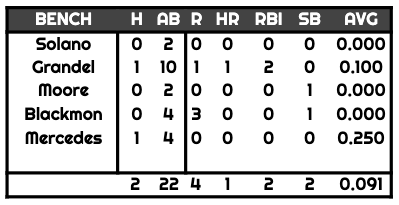 Our bench numbers were so endemic this past week that they may have made our overall numbers look worse.

Since we started to keep team statistics, this group of five had to have produced the worse batting average in franchise history.

The situation was so challenging for us that three of these players are no longer with the team as of this writing.

When you have such an off week like Murderer’s Row did, it is hard to stay competitive in team statistics.

The brightest spot for our team amongst a two-game losing streak is we have some lights out pitching. We currently rank first in ERA, second in WHIP, and fourth in strikeouts. However, outside of those three categories, we are near the bottom in wins and saves.

Once the league leader in stolen bases, we dropped to second overall and watched as the rest of our offensive category standings took a hit. 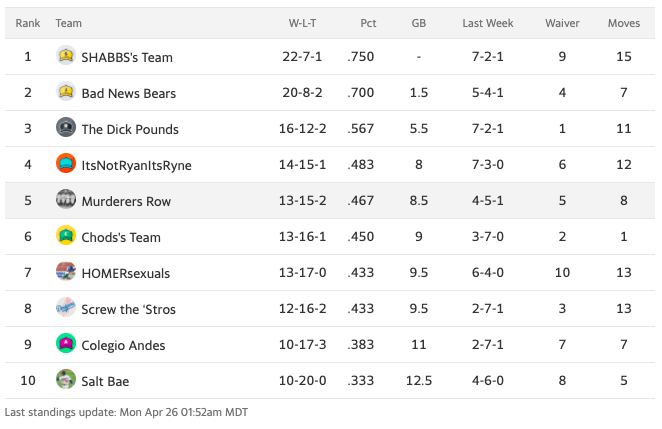 It appears someone hit the shuffle button on their iPod because there was quite a lot of shuffling in the league standings.

Despite the loss, we moved up a spot into fifth. Screw the ‘Stros dropped down to 8th, with Colegio Andes claiming the 9th spot, ahead of Salt Bae in last.

Despite the win over us, Bad News Bears lost the top seed to SHABB’s Team, and ItsNotRyanItsRyne made a considerable jump, grabbing the fourth seed.

There is no way to list the day-to-day roster moves without taking a lot of your time.

Our roster has injuries from top to bottom. Currently, both our IR spots have players on it, and there wasn’t any room for the four players who are out with injuries.

With the injuries piling up and players not producing, it was time to make some adjustments, so management hit the free agency pool.

JT Brubaker (Pittsburgh) joined the rotation because we room to add an arm. Dylan Moore (Seattle) was in a massive slump without a hit in about a week, so we signed Adam Fraizer (Pittsburgh).

Donovan Solano (San Francisco) was added to the IR without a timeline for return, so he was waived in favour of Ty France (Seattle).

In one of the most significant moves we could make, we cut tied with Charlie Blackmon (Colorado) in favour of David Peralta (Arizona), who comes back to the team after spending the majority of last year on the roster. The Blackmon move could come back to haunt us because he’s been a 0.300 hitter for years, but Colorado is struggling, and his numbers don’t warrant a spot on the bench anymore.