For the first time in franchise history, Top of the Rock will be competing for the NHL fantasy championship. After sitting at or near the bottom of the league since joining in 2018, the boys rallied and fought hard all season finishing second overall in the standings. Their great season earned them a first round bye and then a matchup against their fiercest rivals, Bros Before Ahos.

As you’ll read, Top of the Rock had absolutely no business winning this matchup and advancing, however some solid goaltending by New York Ranger Igor Shesterkin was the decisioning factor. The Russian netminder carried the goaltending stats and the rest of the ream on his back into the championship series.

It is safe to say that this matchup came down to just a few categories: assists, wins, goals-against average, and save percentage. Like most weeks, both teams tied shutouts, which meant goals, plus-minus, penalty minutes, power-play points, and shots on goal were all but determined before the weekend.

Bros Before Ahos claimed goals and power-play points by seven while whipping us by 14 in shots on goal. Our only comfortable category win came in penalty minutes, which we doubled them 28-14.

After the Rangers game on late Sunday afternoon, Shesterkin that game won 6-3, breaking the tie in wins, meaning all the categories had been decided except for assists. Jesper Bratt (New Jersey) collected an helper in his game, tying the category in the dying moments of the week. Then before our series was done, Victor Hedman (Tampa Bay) notched an assist in the third period of his game, the final NHL game of the week, giving us a narrow 14-13 category win.

Those three players all played siginficant roles in breaking a 4-4-2 tie on Sunday morning to give us a resounding 6-3-1 victory and a chance at the title.

It can not be expressed enough, Top of the Rock had no business winning this matchup. The boys were getting hammered on opening night, falling before 8-2. Things didn’t get any better through the next four days as the score stayed roughly the same 6-3.

Bros Before Ahos must have thought they had the matchup in the bag as they led by three categories headed into a busy Saturday night. We rebounded and shocked the fantasy world by securing a tie headed into the final day, where a loss turned to a tie then a victory.

In case you weren’t paying attention, Top of the Rock was off last week so our overall team statistics took a hit with no one playing.

There are ten scoring categories in the league and only our save percentage ranks in the top half of the league, leaving the nine other categories below league average.

If anyone was wondering how on earth we finished 2nd overall in the standings and earned a ticket to the title game, let our team records do the talking. In the ten categories, only our assists record ranks below 6th, with four categories in the top three.

Some say fantasy is just luck, and our win-loss records speaks to that. We may not have the best team in the league, we just get the points when we need them and win our matchups to keep the ball rolling. 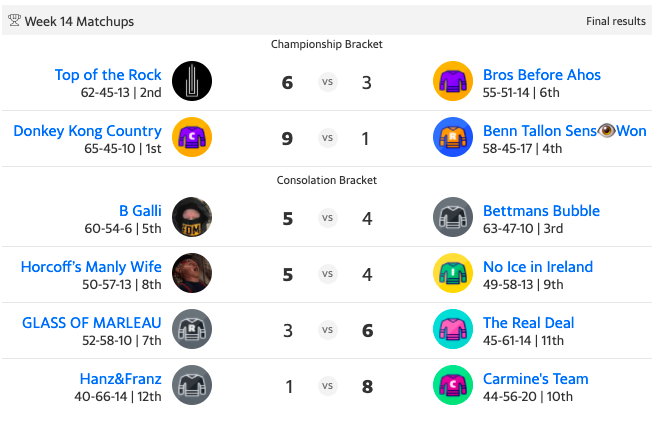 The regular season is over so there are no new numbers to present in the standings. What we now is playoff matchup scores.

This year’s championship finale will feature the top two teams in the league, Top of the Rock and Donkey Kong Country. Last year’s winner, Benn Tallon Sens Won made it to the semi-final, but their title defence came to a crashing end. Bros Before Ahos were the lowest seed left in the championship bracket and bowed out gracefully to a higher seed.

In the consolation bracket, there were two upsets to report. B Galli (5th) edged out Bettmans Bubble (3rd), while The Real Deal (11th) knocked out GLASS OF MARLEAU (7th). In the other two matchups, the higher seed advanced over the lower seed.

Top of the Rock won their matchup and none of the bench numbers would have altered any of the categories we lost. Four players sat out this week because collectively they only had six game son the schedule. They did collect four assists, which would have given us more breathing room in the category, but we won by the skin of our teeth so it wasn’t a huge loss. The nine shots on goals left off the scoresheet would have closed the gap, but we still lost by double digits, meaning there was no impact to the final score.

When Sunday morning rolled around, team management was unsure what to expect in the next game, whether in the championship or the runner-up game, so they made some moves.

We dropped Rickard Rakell (Anaheim) to make room for William Karlsson (Las Vegas), who rejoins the team after being a draft choice at the beginning of the year. Karlsson will step right into the lineup with four games on tap.

We decided to cut ties with Casey DeSmith since his Pittsburgh Penguins only have three games on their schedule this week. Those games are against tough teams, so we signed Braden Holtby (Vancouver), who has four games on his plate and is the main guy now with an injury to batterymate.