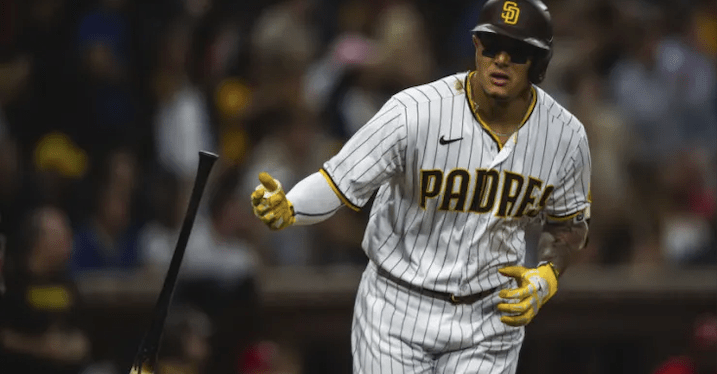 This week’s recap will start with a bit of a history lesson. In the spring of 2021, One Less Curse needed to fill a vacant manager position. That’s when Colegio Andes joined the league.

We’ve had rivalries in the league, but this particular one jumped to the top of the list since it’s pretty personal. In week two, we lost to Colegio Andes 6-3-1, which made this past week’s victory bittersweet.

The final score may have been 5-4-1 favouring Murderer’s Row; however, the teams tied heading into the weekend. Three of our category wins were by one point, runs, stolen bases, and saves. Colegio Andes destroyed us in home runs and RBIs but only claimed strikeouts by five.

We outhit them by 0.083 points while earning a lower WHIP number to take the category by six percentage points. Our opponents had a better weekly ERA while tying us in wins with four apiece.

Colegio Andes looked to continue their winning ways against us, taking the lead on the first three days of the matchup. We battled back from an 8-2 deficit on Wednesday to keep the score tied on Thursday and Friday. Following behind again on Saturday, we flipped the score on the final day, securing the big victory.

When we dissect the bench numbers, no one would have altered the final score. The only significant difference would have occurred in the runs category. Inside of winning by just one, we would have run away with it by 13.

We lost RBIs by seven, so the four missing ones wouldn’t have changed that outcome. Amazingly out team batting average would have gone up by one percentage point when you factor in the 0.313 left on the bench.

Murderer’s Row somehow clings to the fifth spot in the standings, despite being one of the worse offensive teams in the league. The only category worth mentioning is stolen bases, where the team ranks fourth. Three other categories hover around seventh overall, while home runs are by far our worse category.

Overall, our best showing is with WHIP, which ranks second. Next is ERA, with a third overall ranking. Next are wins and strikeouts (fourth), with saves picking up the rear in seventh. 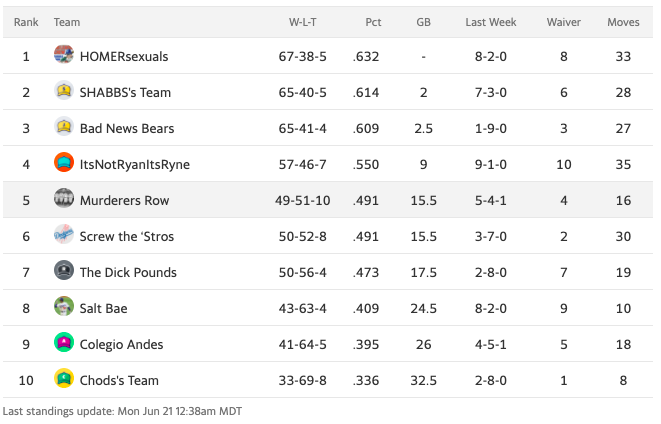 The come-from-behind victory in week 11 pushed Murderer’s Row back into fifth place after spending a week in seventh. Outside of the top teams and the bottom teams, the middle ones are just stuck together. One good or bad week forces them to shuffle around, yet there is no separation since the records are so close.

When Philadelphia Phillies infielder Jean Segura went down with an injury, it opened up a spot in the lineup and signed Kansas City Royal Carlos Santana.

After another loss, management decided it was time to remove dead weight from the team. The first player sent to the waiver wire was Yermin Mercedes (Chicago White Sox), who levelled out after a fantastic start to his career.