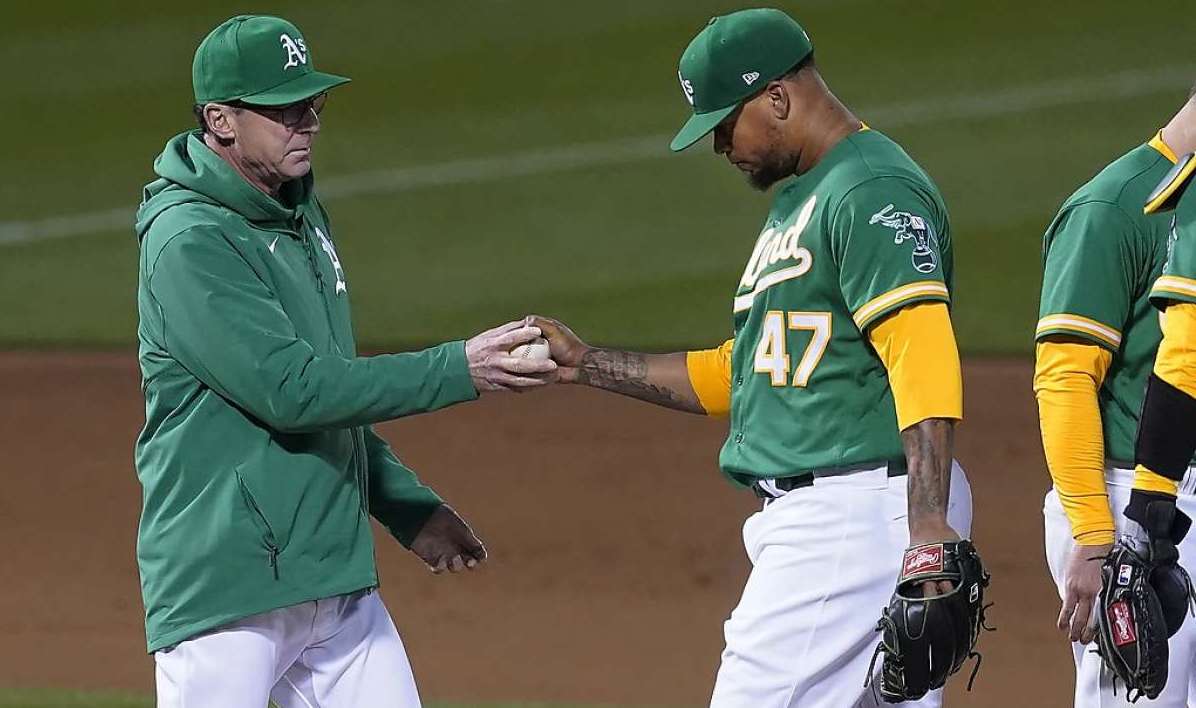 Murderer’s Row’s two-game win streak came to an abrupt end in Week 15, which also put an end to their push to make the playoffs. The 8-2-0 loss to Screw the ‘Stros was a fatal blow since they remain a team to beat to qualify for the postseason.

The loss was the team’s third in the last six weeks which means the boys can’t win the big matchups when they matter most. Murderer’s Row wraps up their season series with Screw the ‘Stros, which resulted in two losses and a 4-14-2 matchup record.

Murderer’s Row had more opportunities (369-352) and collected more hits (111-96) but failed to put much of a dent in the matchup score. The defending league champions almost clean swept all ten categories, only losing batting average and WHIP. The closet Murderer’s Row got to winning more category was wins (5-3) and saves (5-2), with everything else separated by at least 13 or more points. Their most significant margin of victory came in strikeouts, 86-63, which was a difference of 23. 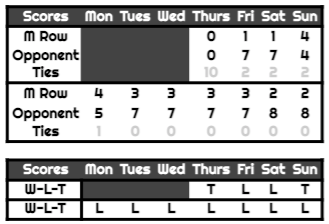 The MLB All-Star game took place early in the matchup, leading to an extended week 15 schedule. Except for the first and fourth day, Murderer’s Row trailed for nine of the eleven days. Screw the ‘Stros’ led 7-1 at one point, their largest lead of the series, while the closest the two teams got was on the second Monday, where the score was just 5-4.

Regarding the statistical categories in the league, Murderer’s Row hasn’t seen any significant movements up or down the charts. They remain the worse team (10th) in home runs and the second-best team in WHIP. The pitching staff has produced better numbers than the hitters, whose only numbers worth talking about is a high stolen base count. The hurlers, meanwhile, are ranked in the top five in four categories while remaining one of the league’s best units. 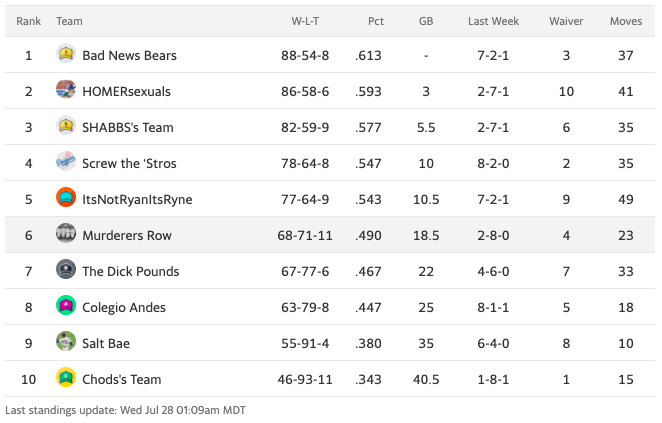 The crushing defeat in week 15 put a damper on Murderer’s Row’s chances of cracking the top four and secure a playoff berth for the first time in franchise history. The loss allowed Screw the ‘Stros to leapfrog ItsNotRyanItsRyne and widen the gap to 8.5 games over non-playoffs teams.

Meanwhile, HOMERsexuals have dropped out of first place, with Bad News Bears taking the top spot. There’s still a chance that the top three teams shuffle again before the season ends; however, everyone outside the top five teams has little to no opportunity to make it to the postseason.

The MLB All-Star game allowed team management to make a flurry of moves to salvage the rest of the season and finish with a winning record.

JT Brubaker had yet to win a contest in many starts, and his numbers were slowly drifting downwards. We swapped out the Pittsburgh Pirates hurler for Frankie Montas from the Oakland Athletics. Montas has a couple of extra wins, with a lot more strikeouts.

Meanwhile, Gary Sanchez (New York) went down with COVID and did not produce the results the team had hoped for when they acquired him. In his place, Cesar Hernandez (Cleveland) joined the team.

Andrew McCutchen (Philadelphia) was acquired to provide some offensive punch, but COVID and an injury sidelined him, which led to his departure after just a few weeks in the lineup. Daulton Varsho (Arizona) joined the team based on a really impressive 14 game stretch that was one of the best in the league.