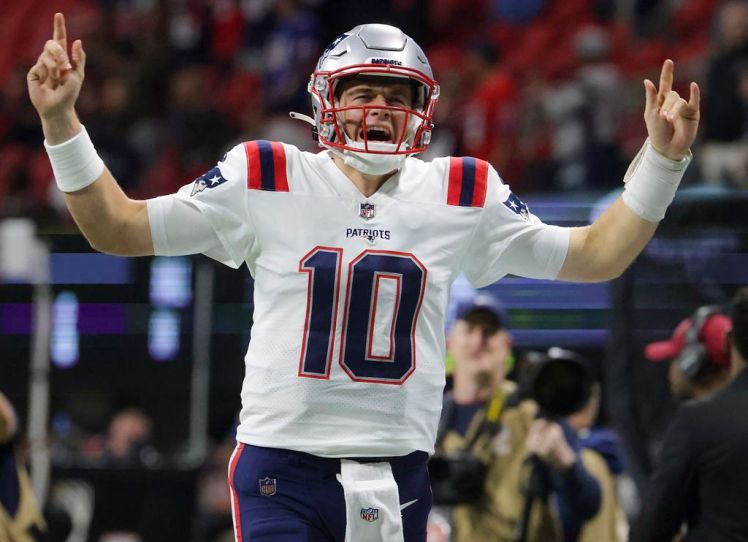 Pinstripe Bowl is the reigning league champions, no matter what happens in the 2021 season. Despite drafting last overall, the Bowl managed to keep their season afloat with a win here and there. It only took ten weeks for the defending champions to finally show they are still the champs.

As the NFL entered week 12, the Bowl was riding a two-game win streak which got extended to three with a come from behind 143.50-129.44 win against Chod’s Team. The win brought the defending champions back to a .500 record (6-6) and helped move them up in the standings. It is still an uphill climb, but the playoffs are possible even though they have spent the entire campaign chasing everyone in the standings.

This week’s matchup didn’t feature any players who suited up on Thursday night. Both teams started at zero on Sunday morning. The Bowl finished the day with a 117.72-109.32 lead with players left on Monday night. On the final day of the matchup, the Bowl scored an extra 9.10 points to finish at 126.82, while Chod’s Team managed just 2.10 to get to their final total of 111.42.

According to the graph, Chod’s Team jumped out to an early lead but plateaued by the end of Sunday while the Bowl kept plugging away en route to the victory. The matchup was initially projected to be 129.69-129.43 in favor of Chod’s Team; however, the Bowl exceeded their predictions and scored over 140 points for the third straight week. 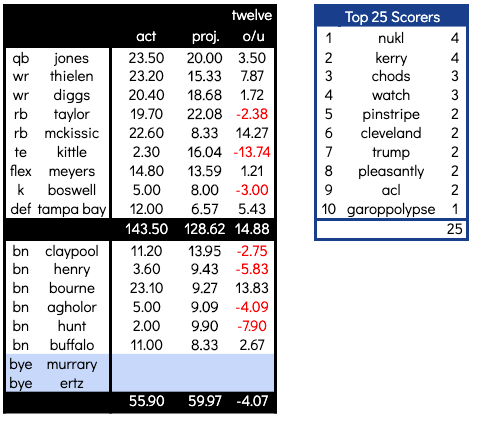 New England Patriots rookie quarterback Zac Jones continues to impress, leading the Bowl in points for the first time this season. He exceeded his projections by 3.50 points, becoming one of five players to score more than 20 points in the matchup.

Three starters failed to meet their projections, with George Kittle (San Francisco) having a dreadful week with just 2.30 points. Jonathan Taylor (Indianapolis) scored 19.70 points despite failing to meet or exceed projections by 2.38 points.

The bench witnessed three players reaching double digits, while the three other players failed to get to five points. They came in 4.07 points under projections with two critical offensive weapons on the bye.

As mentioned, the Bowl scored over 140 points with 143.50, the second-highest total in the league. KerryMy Johnson scored a league-high 150.54 points while no other team secured over 130 points. Two teams failed to reach the century mark, while Garoppolyse Now managed to win their matchup with the lowest total (104.58).

Nukl Busters and Garoppolyse Now are still battling for the top spot in the standings with identical 8-4 records. The two other playoff teams, Chod’s Team and WATCH WHAT U SAQUON have 7-5 records. What’s an ACL anyways? claimed their second victory of the season with a shocking 108.40-97.52 win over the first place Busters.

Jones became the second quarterback (besides Kyler Murray) to win best player honors. His 23.50 points were the third-lowest totals of anyone to earn the award. He was joined by teammate Kendrick Bourne in the winner’s circle as Bourne scored the most points by a bench player with 23.10.

Kittle scored 2.30 points which was the second-lowest total on the team outside of Kareem Hunt (Cleveland), who scored only 2.00 while sitting on the bench. Meanwhile, in Tampa Bay, running back Leonard Fournette scored a league-high 44.10 points. Fournette became the fifth running back to win the award and was the second in a back-to-back since Taylor took top honors last week.

It was another quiet week in the front offices of Pinstripe Bowl, who made only one transaction for the second week in a row. After Ty Johnson (New York) failed to produce any points in his limited role, management resigned Nelson Agholor from New England. The standout wide receiver rejoins the Bowl after being drafted at the start of the season.