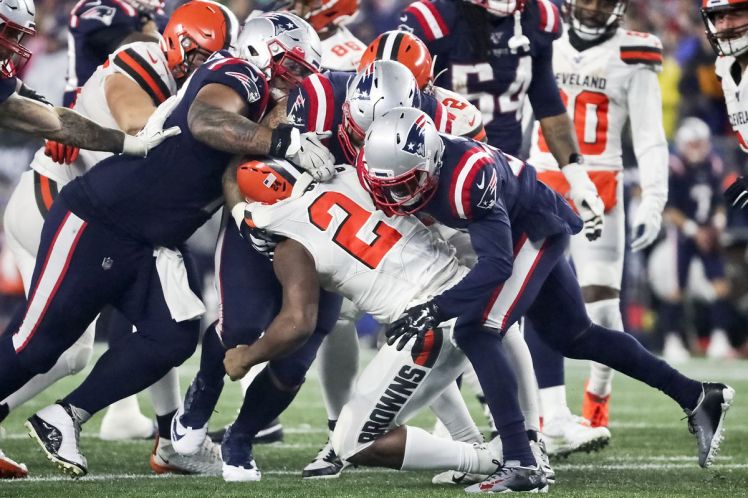 The New England Patriots had shady defence throughout most of the 2018 season. Despite their shortcomings, the team still won one of the most boring Super Bowl games. It happened because of the defence. This season, the guys in blue are on pace to become one of the greatest of all-time.

We thank our blessings every Sunday when our fantasy team takes the field led by Patriots quarterback Tom Brady and the New England Defence. Combined, these two have won us more games than Yahoo predicted. 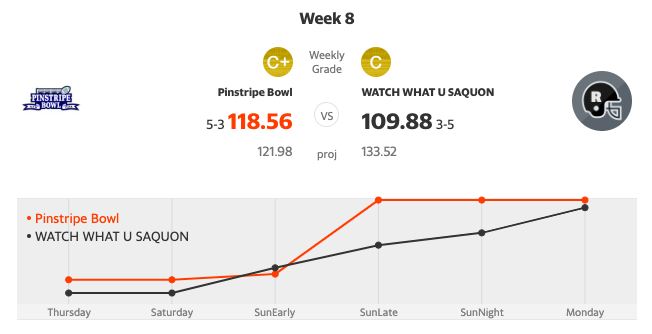 In one of the tightest matchups all season, Pinstripe Bowl kept the win streak alive with a thrilling 8.68 point victory.

Thanks to Stefon Diggs (Minnesota) and Terry McLaurin (Washington) going head to head on Thursday, we jumped out to a 27.20-12.00 lead. Things looked bleak Sunday morning as projections tipped in their favour, but the Patriots hadn’t played yet. By Sunday night, we built a comfortable lead and ended the night with a 118.56-80.98 advantage.

WATCH WHAT U SAQUON had two Pittsburgh Steelers left to play on Monday Night Football. Lucky for us, the Steelers barely beat the Miami Dolphins, which meant there wasn’t a chance of them catching us. They made it enjoyable, but our victory was wrapped up before the MNF game was over. 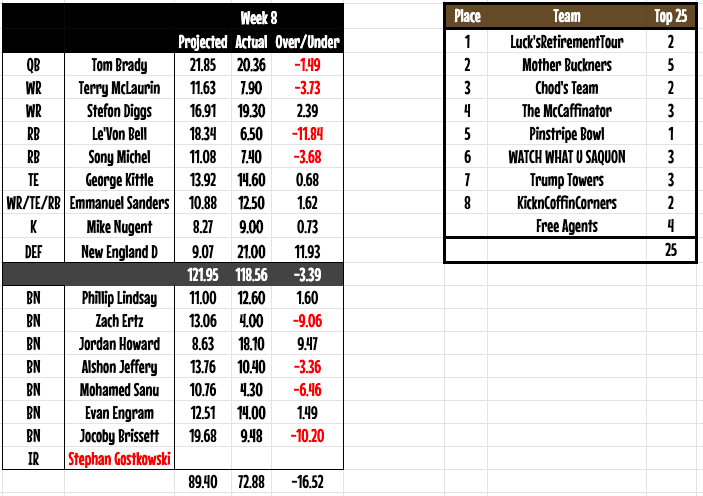 It was interesting to see that despite four players in the red, including Le’Von Bell’s -11.84 against his projections, the starters only failed to meet projections by 3.39 points. The bench players were a little worse for wear with a combined -16.52 against the spread.

We kept Emmanuel Sanders (San Francisco) in the lineup even though it was his first game in the red and gold. Anyone could have played in that flex position, but we figured he’d find some chemistry with Jimmy Graponlonio soon enough.

If do-overs were allowed, we might have reconsidered our running back decisions. Both Sony Michel (New England) and Le’Von Bell (NY Jets) failed to reach double digits, while Phillip Lindsay (Denver) and Jordan Howard (Philadelphia) scored more than 12 points apiece.

Recently acquired Indianapolis quarterback Jacoby Brissett was a -10.20 against his projections, second worse on the team. Thankfully he is only waiting on the bench to play in the Week 10 matchup.

Here are the rest of the week 8 scores: 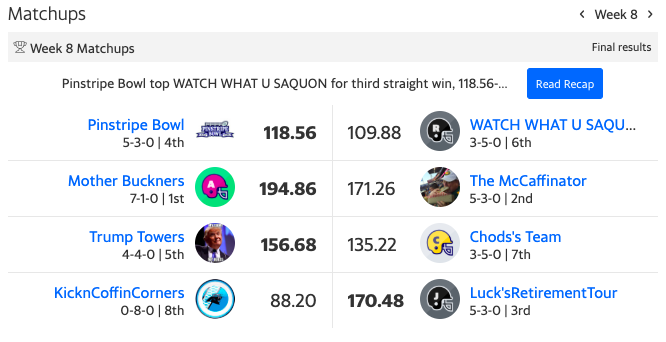 For the umpteen time, were the lowest scoring victorious team. We would have lost to five of the eight teams with our 118.56 points. Mother Buckners came within 5.14 points of becoming the first team to top 200 points in a single week. The most lopsided win belonged to Luck’sRetirementTour, whose 170.48-88.20 victory was an astounding 82.28 point difference. 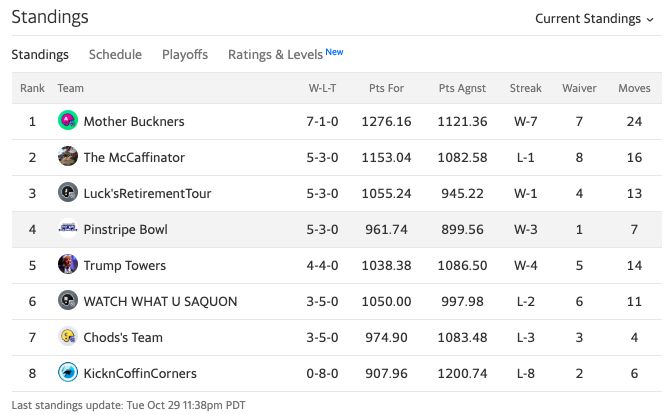 Thanks to a three-game winning streak, we hold onto fourth place by a game. Mother Buckners continue to win and look to secure the top spot well before the season comes to a close. We remain the only blemish on their record, which they plan to avenge in Week 10.

Pinstripe Bowl is the third-lowest scoring team and hasn’t cracked 1000 points yet. It doesn’t matter how many points we score, as long as we remain a plus team. So far, we have a +62.18 difference in points for and points against.

In preparation for upcoming bye weeks for several players, we made a major roster move.

Since Sterling Shepard (New York Giants) is in concussion protocol with no return in sight, we decided to cut the wideout. In his place, we grabbed quarterback Jacoby Brissett.

Brisset heads into Miami for a matchup in week 10. Our star quarterback, Tom Brady (New England), will have the week off, so we needed someone behind center calling plays.

The Dolphins give up the second-most points to the quarterback position, so here’s hoping for a blow out in our favour!