In week six, Canyon of Heroes watched their losing streak hit five games in a row. Although we had a significant roster shakeup the previous week, we watched in agony as the Killer Bs handled us our most lopsided loss of the season.

We lost every player category, with game-winning goals being the only one we came close to tying or winning. The goals against category could have gone either way since we only won by one percentage point.

There was some breathing room in regards to save-percentage, but that was our most significant margin of victory in our four category wins.

We fell behind on the first day, which was unusual for us as a team. We rebounded sharply on Tuesday and Wednesday to see our hard work blow up in our faces before the weekend.

Our team had all but given up by Saturday. Only thanks to a handful of category wins (credit to our goalies), we were able to save face and sidestep a massive blowout. 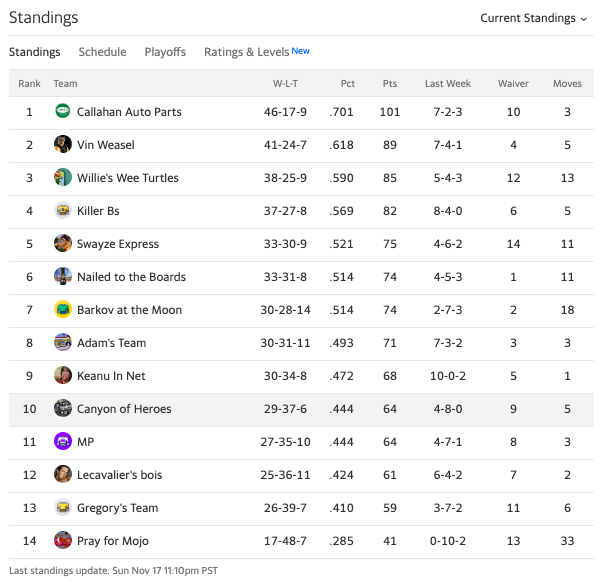 We don’t remember where we were during the week five matchup, but after the loss in week six, we stand in 10th overall. We are 10 points out of sixth place, which is the cut off for playoff teams.

Last season, we hung around in the bottom third of the standings for the entire season. Although we have a 23 point cushion to stay out of the last place, if these loses don’t stop, who knows where we could end up. 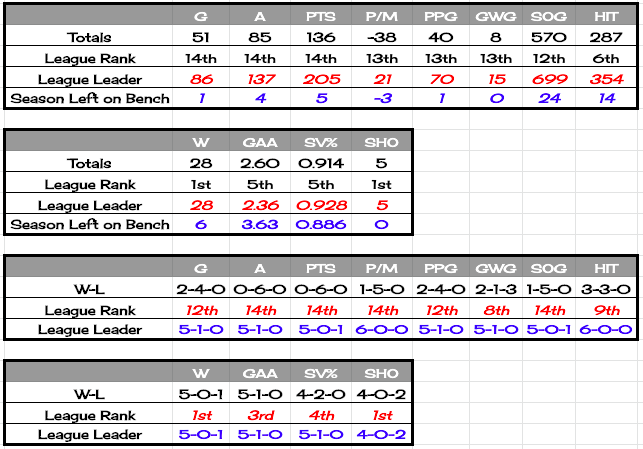 A lot can happen over seven days. Just last week, we had the seventh-best game-winning goals, now we sit in 13th. Out of the eight-player categories, we rank dead last or second to last in seven of them. The only category we made progress in was hits, moving from eighth to sixth.

We continue to pace the league in wins and shutouts while improving our team’s goals-against average and save percentage.

Some matchups are won and lost based on points not collected. In week six, you can see we left a total of four points on the bench, which would not have affected the final outcome.

Goaltending was also one of our weakest links this past week. We got lucky that a handful of bad performances stayed on the bench and didn’t affect the final score. We would have easily lost the goals against and save percentage categories if all our goalies had played.

Since Anthony Mantha was eligible for a spot on the Injured Reserve, we were able to snag utility forward Jared McCann (Pittsburgh) to fill our vacant roster spot. McCann has seen his role in Pittsburgh increase with Sidney Crosby sidelined due to injury.