Canyon of Heroes dropped their second consecutive matchup, this time a 7-5 score to Lecavalier’s bios. This loss follows last week’s 10-1-1 beat down, which means we’ve been outscored 17-6-1 since week 16.

For the second straight week, we only secured one offensive category win. The majority of our points came off the backs of our goalies, who won all four of their categories.

Things were pretty dicey up front, where we lost by 18 points. That was by far our worse category loss since they scored 12 more goals and six more assists. The plus/minus total was a swing of 10 points in their favour while power-play points and hits were lost by three points and game-winning goals one. Our only win was in the hits department, where we collected four body checks.

In regards to goaltending, Week 18 happened to produce some of our best numbers. The six wins match our second-best output on the season, while the one shutout gave us our ninth category win of the season.

The minuscule 1.42 goals-against average and 0.960 save percentage were both season highs.

It always feels like a punch to the gut when at some point, you grab a commanding lead in a matchup, only to lose it by the final day. We felt pretty good about ourselves on Wednesday when we opened up a six-point lead, a lead we maintained until the end of Saturday night. 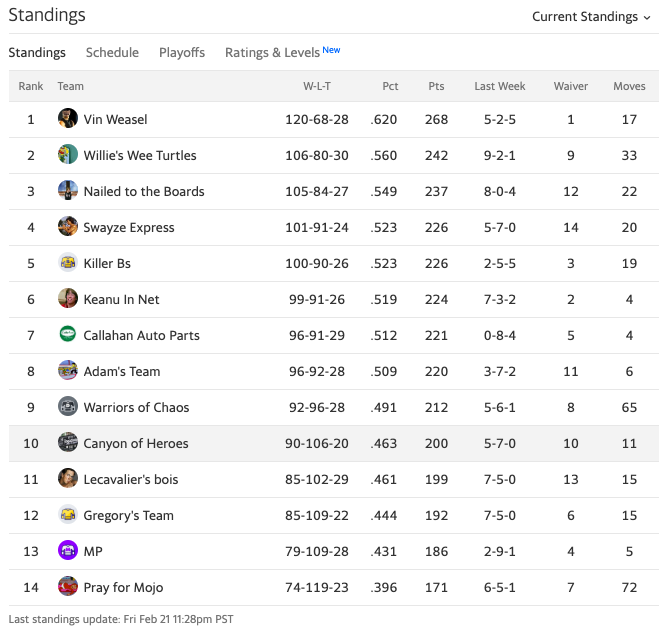 Since we have only secured one win since week nine, you can see we sit in 10th place with a sub 0.500 record. 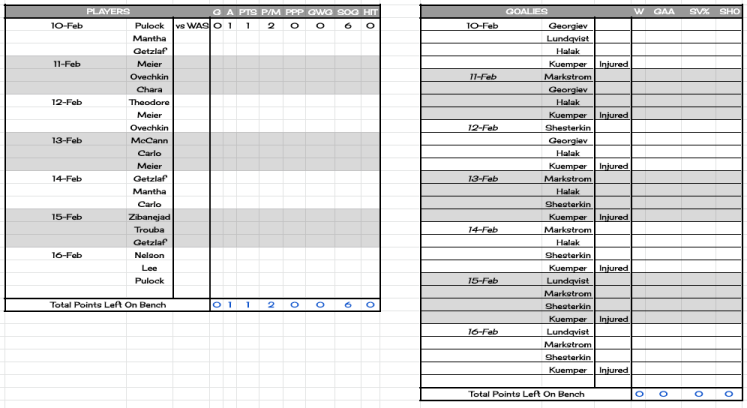 There have been some weeks where we wonder why we fill out the spreadsheets. Maybe it is strictly for record-keeping purposes, but as you can clearly see, nothing of significance happened with our week 18 bench players. The only reason there was one player with stats was because we forgot he had a game on Monday night. 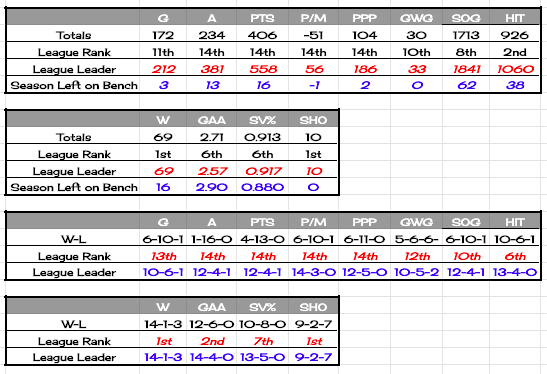 After an impressive week from the guys with pads, we jumped up the charts to grab the sixth place in regards to our GAA and Save %. There will be no double digits spots for us this week in those categories.

On the final day of the 18th week of the season, we cut one of our draft choices, Detroit Red Wing Anthony Mantha. In case you forgot, Mantha spent the majority of the season injured and really didn’t contribute to the team as we had hoped when we selected him.

In his place, we signed New York Islander forward Derick Brassard. The former New York Ranger appealed to us because he can play all three forward positions, and that option could come in handy on a nightly basis.