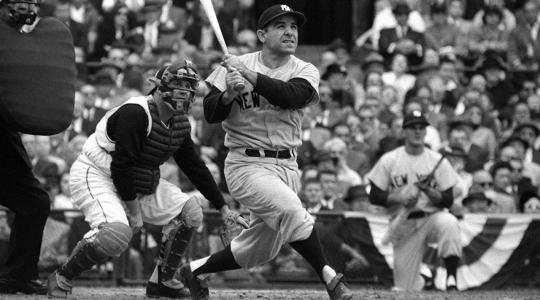 Book Summary: One of the many biographies based on the life and career of Yogi Berra.

I selected The Life and Times of an American Original because it was one of the unabridged books on Audible. I know who Yogi Berra was. I understand his place among the greatest players of all time. This book made me appreciate Berra as a person and as a ballplayer. I have always known he is the only player in the game’s history with ten championships, but now I know how he achieved each one.

What I did not know is that Yogi Berra played year by year with his contracts. After every season, he would negotiate his new contract. It amazed me because no player in today’s game would act in his manner. Most guys aim for hundreds of millions of dollars on eight to ten-year contracts. Yogi would win the American League’s Most Valuable Player award and then would have to negotiate a slight pay increase. I thought it was a fantastic reveal, one I never heard of before.

The book chronicles Berra’s early years, his rise through the minors, and his extensive league career. I never knew Yogi was Italian. What I got to learn was how close he was to his Italian roots. Whether it was pasta and bread every night, or the story of how his family migrated to the United States, Yogi was always proud of his culture and family history.

Like most kids in his generation, they played a lot of streetball, and Yogi developed his passion for the game at a young age. Since he was born and raised in St. Louis, he always favoured the teams from his hometown. He dropped out of high school and drove his father crazy because he didn’t want a real job; he wanted to play baseball.

Berra got drafted into the United States Navy during World War II. He served on a handful of boats, but his heart was always on the ball diamond. The book shares many stories and quotes from friends who knew him during his service years.

After his tour of duty, Yogi returned and battled to earn his place in the big leagues. In 1946 he finally made it and stayed with the Yankees until 1963, when he retired as arguably the greatest catcher of all time. During his time in Pinstripes, the three-time American League MVP, there were numerous comparisons to his best friend Joe Garagiola Sr. and Brooklyn Dodgers catcher Roy Campanella.

Despite the comparisons, the short catcher only got better as this career progressed. The book digs deep into those criticisms, and many times, Yogi comments on the matters himself. Never shy to speak his mind when it came to baseball, Yogi left it all on the field.

Besides the fact that Berra negotiated his contracts every year, the other big thing I discovered is his part-time job. Since baseball players didn’t make millions like they do today, Yogi Berra owned and operated bowling alleys and men’s tailor shops. Most fans would know that Berra will always be associated with Yoohoo drinks, but not many will dig deep into the sponsorship he championed. The book will detail the contact and his earnings. It will also showcase the offseason when Berra and Yankees shortstop Phil Rituzzito would work as tailors.

After his playing days, the book will take you through Yogi’s journey as coach and manager of the Yankees and Mets. I remember hearing about the self-imposed boycott, and now I have a complete understanding of why Yogi Berra stayed away from Yankee Stadium for 14 years.

Like I mention before, there are so many books based on the life and times of Yogi Berra. His outgoing and charming personality is a writer’s dream. There may be better books written about the catcher, and there may be worse ones. I found this one to be in the middle. I learnt a lot about his life on and off the diamond, but there was more to tell. I felt this book skipped over many parts of my career and only focused on the significant points. Biographies do that sometimes, which is fine. A guy with his life deserves to have numerous portraits, and he had a fascinating experience.