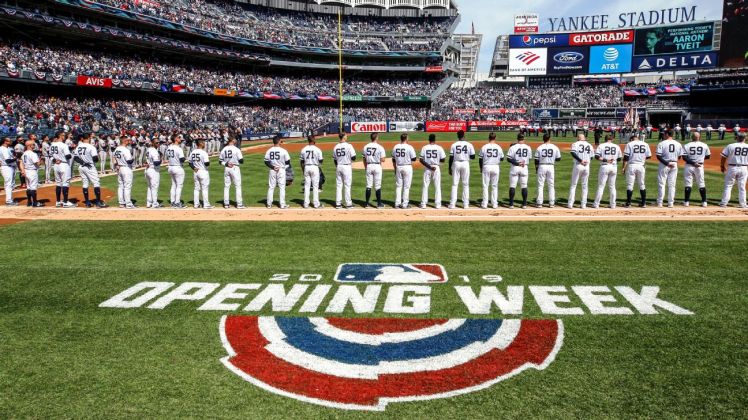 Fantasy baseball is back! As most of you know, when the final out is recorded in the World Series, I start the countdown to Opening Day.

Despite how much I know about the game and the analytics behind it, I never seem to play to win. I talk a big game all winter that winning a fantasy baseball championship is all I want to accomplish in my life, yet continue to pick with my heart and not my brain.

As you’ll read in the weeks to come, BD4 will not win the 2020 COVID fantasy baseball championship. We will be fortunate enough to finish out of the last place. We all will say it won’t matter, as long as the game continues on, but this season will be unique, and we just want to go along for the ride.

They all laughed at us, but when you look at the final matchup numbers, we hung in there the entire opening week, despite not playing for three days.

Our three category wins came on the mound, where we secured wins, ERA, and WHIP. It was razor close in the other two categories, where we lost saves 4-3 and strikeouts by five 62-57. Considering we do not employ the services of Gerrit Cole and most of our staff had off games throughout the week, those are very respectable numbers.

It was a clean sweep in the offensive categories for The Dick Pounds, with home runs (20-17), the closest we got to a category tie. We lost by 14 in both the runs and RBI categories and stole four fewer bases (7-3). Our team batted 0.22 under our opponents, who finished at 0.265 for the week.

Our largest lead came on opening night since the Yankees were only one of our four teams to take the field. Things looked bleak after the opening weekend, as the Yankees did nothing besides hanging out in hotels due to a COVID scare in Philadelphia. The lack of games really hurt us daily as we found ourselves down 10-0, 9-0, and 8-1 over six days.

When the guys returned to the field, the matchup had all but been won, although we did make things interesting in a few categories.

If you are a regular reader of our weekly recaps, you’ll know the importance of bench players. They can make or break your matchup.

Since the majority of our team are starters, there’s not a whole lot of action going on our bench. As you can see, days that Mike Tauchman or Tyler Wade subbed into a game, really didn’t factor into our matchup totals.

After the first week of action, we were ecstatic to see we were not the worse team in the league (yet)! Defending league champions Bad News Bears found themselves on the wrong side of a 6-4 loss, which started their season in eighth place.

We currently sit in ninth place, only one point above DODGE this!. Jamie’s Team is our current league leader with an 8-2 record, followed by The Dick Pounds, who are 7-3 and in second place, thanks to their victory over us. 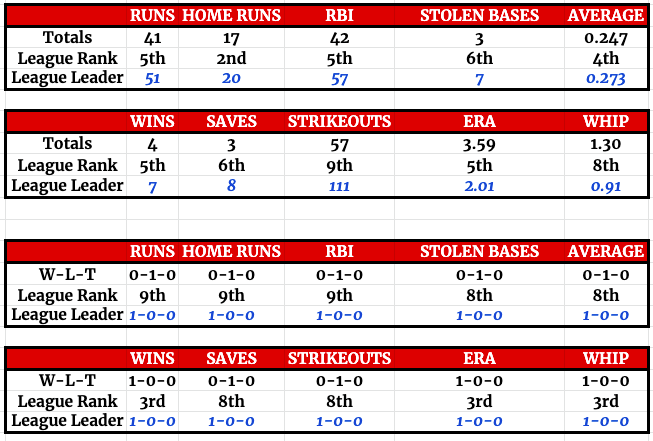 We were mocked from the moment we made our second draft pick, Gleyber Torres. Everyone who participated in our draft probably rolled their eyes and said, here we go again.

Our entire lineup is made of New York Yankees players, so if they have a terrible game or get shut out, our overall numbers are going to take a pounding.

Despite not playing all the games they were originally scheduled for, the Yankees put up some impressive numbers in the first week and a half. Management here at BD4 wants to say thanks because we are not the worse team in any team category.

It is still early, but we rank in the top five in six of the ten categories, with our best showing in home runs. Our worse category is strikeouts and WHIP.

Since there are only seven matchups during this short fantasy season, instead of writing out the numbers of our studs and duds, we decided to just share the numbers from our spreadsheet.

Aaron Judge was our superstar of the week, racking up an impressive 30 points all by himself. Max Scherzer turned out to be our best pitcher with 21 strikeouts.

Miguel Andujar didn’t play a lot, nor did he get a ton of at-bats, but he failed to produce when he was in the lineup. On the mound, J.A. Happ had a short outing and just couldn’t get batters out.

After the draft was complete, we had two players who were on the IL for COVID-19. That allowed us to move some players there and open up roster spots. Tyler Wade expects to get a lot of playing time this season, so we added the versatile infielder who can hit and run.

There is no denying that we were in full panic mode after just a few games. Trailing in our matchup 9-0 for several days, we began to think our whole concept was a disaster. The end was already here, and we had only just begun. We decided that maybe it was time to break up the band and scouted out former Yankees to keep part of the theme alive. Although he hasn’t played much yet, Gregorius has already had a smooth transaction to Philadelphia.

Clint Frazier may never be a star in New York, there’s just no room for him. Sadly, Frazier found himself back at the alternate training site because there are too many outfielders on the big club.