Pinstripe Bowl franchise icon Tom Brady may have departed from New England and boarded the pirate ship in Tampa Bay, but the greatest player of all-time came through in the clutch for us yet again.

His numbers were not off the charts, and his team didn’t stomp the New York Giants liked they could have. However, Brady and kicker Ryan Succop’s performances earned us the closest 2020 victory on record with a 110.16-109.22 win over the first place KerryMy Johnson. The 0.94 margins of victory may end up be the closest win anyone secures this season.

KerryMy Johnson was and still remains the best team in our league. Their success is their ability to capitalize on their opponents’ weaker rosters and score many points.

They jumped out to an early 15.60 point lead after Thursday Night Football. Then outscored us 76.52-67.50 through Sunday games, which gave them a very comfortable 92.12-67.50 lead. The chances of victory were pretty good, but a 42.66-17.20 performance from Pinstripe Bowl on Monday Night Football secured the come from behind victory. A victory that we never lead at any point.

It is simply amazing that Pinstripe Bowl pulled out an upset victory over the first place KerryMy Johnson when eight out of ten players failed to meet their projections. Only our special teams, kicker and defence, were the only players to exceed their point projections.

When you dig a little bit deeper, our starters failed their numbers by 20.13 points and our bench, with just four players, failed even worse by 26.77 points. Add it up, and you will see we failed to meet any of our projections by 46.90 points!

We will break those numbers down even more. Our running backs combined for 36.60 points, 11.82 points under their projections. Our wide receivers and tight end were much worse, scoring just 22.50 points than their 44.64 projections for a 22.14 difference. 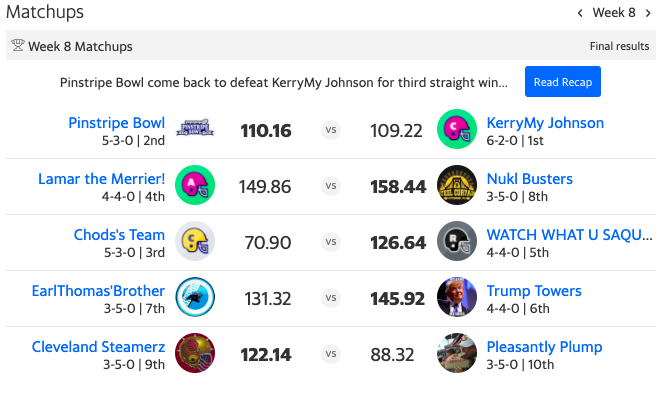 Our week seven matchup witnessed the closet margin of victory of the season, just 0.94 points. Our 110.16 points were the lowest win total of the week, losing out to Nukl Busters, who scored a league-high 158.44. Trump Towers followed with 145.92 and WATCH WHAT U SAQUON, and Cleveland Steamerz each scored over 120 points.

Two teams, Pleasantly Plump and Chod’s Team, each failed to score 100 points in their losses.

Thanks to our shocking upset win over the first place KerryMy Johnson, we moved up a spot into the second overall seed. We dropped another spot in regards to most points scored, where we now sit in third place.

The remaining six teams refuse to separate themselves from one another, with three teams tied with 4-4 records and four teams knotted up with 3-5 records. It should be an exciting final six weeks.

Our matchup victory was the closest of any series this season. The margin of victory shows up in the studs and duds since our top player, Brady, only managed to score 21.06 points. Things were down to the wire because we lose Kenny Golladay to injury, and he put up a goose egg.

Meanwhile, in Minnesota, Dalvin Cook returned and ran up an impressive 48.60 points to be the league’s best player.

If you follow the NFL regularly, you probably got word just like the rest of us that Odell Beckham Jr. tore his ACL and is done for the season. That injury forced our hand, which resulted in him departing the team.

After the Washington defence helped us in week seven, they headed for a bye in week eight. In their place, The Indianapolis Colts defence stepped in and chipped in a respectable amount of points in our upset.

Zane Gonzalez has been a superstar for us, but he went on his bye week for our current matchup like our defence. Ryan Succop helped his team, Tampa Bay, hold off a feisty New York Giants on Monday night.

In a rather odd move, we cut ties with draft choice Anthony Miller, who had his best game of the season in week 8, favouring A.J. Green. Green had a rough four weeks before putting up respectful points in the last couple of weeks.

Since we had an open spot on the roster, we signed free agent Christian Kirk, who put up over 20 points the last two weeks.