In week 10, Pinstripe Bowl was the toast of the league, securing the top spot in the division for one week. Since that day, the Bowl has lost back to back games and clung to their second seed and a playoff spot. 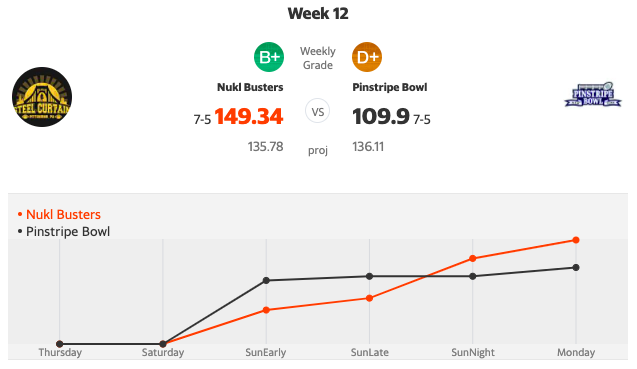 Pinstripe Bowl had a lot riding on Sunday afternoon games, including the Arizona Cardinals at New England Patriots. Our quarterback Kyler Murray and flex player Christian Kirk was projected to have big games, and both failed to live up to anything worth reporting. The two Cardinal players combined for 13.30 points in the New England 20-17 win.

We jumped out to an early lead on the back of Derrick Henry (Tennessee), who scored an astounding 38.50 points in his game. Henry ended up scoring the second-highest point total of the week. However, because none of his fantasy teammates showed up for their games, which opened the door for Nukl Busters to go ahead and stay ahead. Despite the fact we had one player left in the Pittsburgh and Baltimore game on Wednesday afternoon, Busters had all but won the matchup with three of their own in the lineup.

When you look back at our 39 point defeat, you don’t have to dig too deep to see what happened. Only three of our ten starters managed to meet or exceed their projections, as the team finished 26.19 points under expectations. Those numbers could have been a lot worse if it wasn’t for Henry’s 22.66 extra points.

By far, our worse player was Murray, who hasn’t appeared to be the same since a hit against Seattle in week 11. He managed a season-low of 8.90 points, some 17.54 points below his projections. Josh Jacobs (Las Vegas) also underperformed by 10.72 points, leaving the game because of an injury. Jacobs isn’t supposed to play in week 13, which speaks volumes to the extend of his injury.

For the first time this season, our bench players, led by Tampa Bay’s Tom Brady, managed to outperform the starters. They didn’t outscore their counterparts, still 109.90-66.20, but they managed to stay positive and exceed their projections by 7.78 points.

Week 12 witnessed all five victorious teams scored over 140 points, with KerryMy Johnson being the best with 166.62 points. Pleasantly Plump, Lamar the Merrier!, and Trump Towers all outscored us in their defeats. The Bowl managed the second-lowest score of the week ahead of Chod’s Team, who secured the lowest weekly total of the season with just 57.40 points. 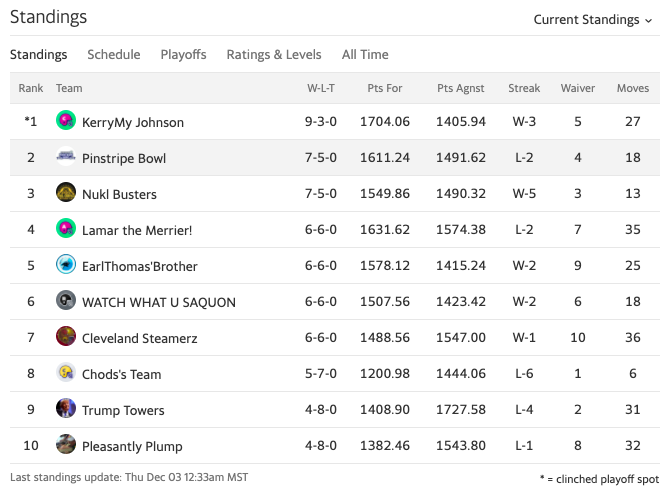 A few ago, we stated in our column that there was a realistic chance that all the teams could have finished with 7-7 records. Fast forward to the standings after 12 weeks, and that statement no longer applies. However, there is still an outside chance that seven out of the ten teams could finish with a 0.500 record, forcing tie-breakers to go into effect, which are most points scored.

KerryMy Johnson has secured the top spot in league with only two weeks left. The Bowl remains tied with arch-rivals Nukl Busters for second overall, while the defending champions Lamar the Merrier! cling to the final playoff spot. They are currently tied with four other teams with 6-6 records; however, they currently hold the tiebreaker with 1631.62 points scored, second-most in the league.

We mentioned earlier how special a day Henry had on Sunday, racking up a league-leading 38.50 after the first set of games. Tyreek Hill would eventually score a league-high and season-high 57.90 points later in his afternoon game against Tampa Bay. Our worse starter should have been quarterback Murray, yet his wide receiver Christian Kirk scored even fewer points and took the honours. Tom Brady, meanwhile, won his third straight best bench player award and fourth overall.

In week 12, the Bowl made two transitions. After the Minnesota defence scored just four points against one of the worse teams in the league, the Dallas Cowboys, we decided to move on from purple and yellow.

We were unsure what Sony Michel’s status would be after spending most of the season on the IR, so we cut him and added the New York Giants defence. The Giants had a favourable matchup against Cincinnati, who was rolling with their third-string quarterback.

The defensive swap earned us an additional four points since the Giants secured nine and Minnesota collected just five.