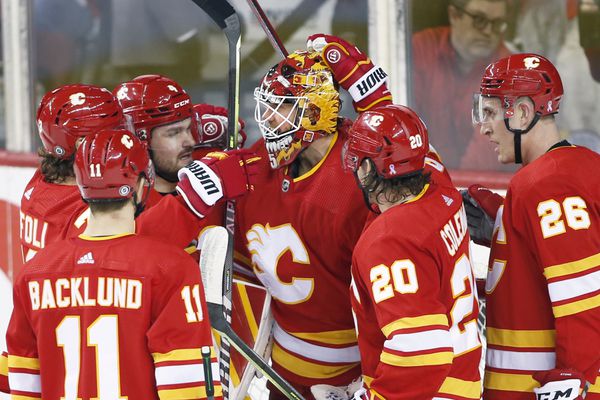 The NHL used week 16 of fantasy to pause the regular season and send the best of the best to Las Vegas for the annual All-Star game. Yahoo used this opportunity to push two weeks of hockey into one, giving teams an abundance of opportunities to rack up fantasy points.

When the teams returned to the ice, things were pretty quiet, with Sanchez just knocking 0.50 points off the deficit. The two teams saw an uptick in scoring on Tuesday, but the Rock continued to outscore Sanchez as the final weekend approached. When the final buzzer sounded, the Rock had secured a 162.50 point victory, setting franchise records for the most significant margin of victory and most points scored in a single matchup.

The win tied the season series with Sanchez at 2-2, with one more matchup slated for week 21.

It took 16 weeks, but the Top of the Rock players achieved their first-place ranking in any offensive category. Despite being in second overall in shots, hits, and blocks for the bulk of the season, they finally got out of that groove and became the best team in blocked shots. The goalies also remain the best team in shutouts, so for the first time in 2021, the Rock holds down the top spot in two separate scoring categories.

Like the previous weeks, the remaining categories have stayed pat, with only a handful of them ranking in the league’s top third. The worse category remains short-handed points, where the boys remain one of the only teams still in single digits.

As the wins and losses pile up, the league is slowly splitting into two groups, the clubs with winning records and the ones with losing ones.

Elias Lindholm (Calgary) skated away with the team’s best player award thanks to a personal best of 42 points. Week 16 marked the third time the Flames forward claimed the award while securing the team’s third-highest point total, behind Victor Hedman’s (Tampa Bay) 43 and Gabriel Landeskog’s (Colorado) 42 points. The native of Boden, Sweden, finished the extended week with four goals, two assists, and a plus-six rating. He collected 16 shots, five hits, and seven blocked shots.

His teammate, Jacob Markstrom (Calgary), claimed another best goalie award with a team record of 80.50 points. Markstrom has been one of the best goalies in the NHL and had his best fantasy week, breaking his previous record of 74.50 points set in week three. This win was his seventh of the season, giving him a stranglehold on the award with 43% of the winnings. He collected four wins with a shutout, giving up 16 goals, and making 119 saves during the week.

When a team racks up an impressive number of points, there’s bound to be a player who contributes very little despite the team’s overall performance. This week’s worst player was Toronto’s William Nylander, who scored 2.00 points across the extended series. Despite picking up three assists and two power-play points, his minus-eight rating harmed his final numbers, including 16 shots, one hit, and two blocked shots.

Top of the Rock team management did not execute any player transactions during week 16.